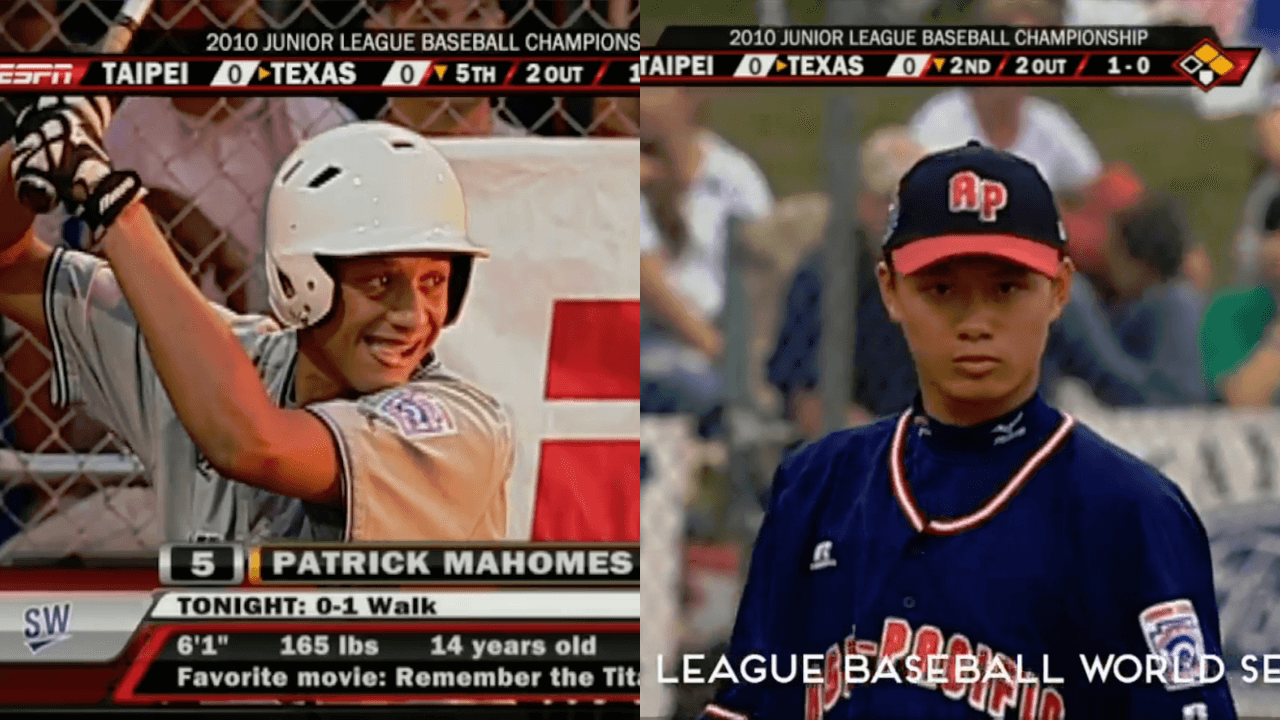 Lin Tzu-Wei vs Patrick Mahomes in 2010

On February 3, the Kansas City Chiefs defeated the San Franciso 49ers 31-20 at Super Bowl LIV. The Chiefs’ 24-year-old quarterback Patrick Mahomes was named the Super Bowl MVP, making him the youngest player in the NFL history to win the award.

Before anyone asks, no, we are not branching out to other sports. We happened to come across a CPBL connection to this years’ Super Bowl and figured it would be a fun blog post during the off-season.

Notes: Just in case anyone is wondering, this Lin Tzu-Wei is not the Boston Red Sox’ Lin Tzu-Wei. Both players have the same romanised name in English and are roughly the same age.

Coming through in the clutch…again.

In the video, Lin Tzu-Wei gave up an RBI single to Patrick Mahomes in the bottom of the fifth. Despite the setback, Lin settled and tossed 6.1 innings with ten strikeouts and led Taiwan to a 9-1 victory over the United States.

Apart from his dominating performance on the mound, Lin Tzu-Wei also displayed his ability with the bat. Hitting in the lead-off spot, Lin collected two hits and three RBI during the game.

Lin Tzu-Wei’s fist hit happened in the top of the sixth, where he tied the score 1-1 with an RBI single to the right field. In the next inning, the bases loaded, Lin ripped one to the opposite field for a 2-RBI double and extended the lead to 9-1.

Elite Amateur Pitcher Once Upon Time

Over the years, Lin Tzu-Wei continued to hone his craft as a pitcher and was selected to represent Taiwan’s junior national team on numerous international tournaments. Before turning professional, Lin was widely considered to be the next big amateur pitcher in Taiwan with his 148kph fastball.

Tough Road in Pro Ball Due to Injuries

Lin Tzu-Wei was one of the classic cases of a team rushing its prospect to the first team before they are ready. He found some early success at the tail-end of the 2015 season where he posted a 3.04 ERA and 1.09 WHIP across 26.2 innings.

Due to his performance, instead of giving him more seasoning in the minor league, the Uni-Lions management team made a huge mistake by keeping him on the first-team roster.

With the lack of preparation for professional scheduling, Lin Tzu-Wei eventually hit a wall and struggled in 2016. With his confidence busted and never-ending injuries, Lin had limited first-team game time from 2017 to 2019. To make things worse, he lost his control and fastball velocity. It dropped from 145kph to around 137-139 kph.

The 2020 season is going to be a crucial year for the once highly touted prospect. Although Lin Tzu-Wei is only 24 years old, if he continues to struggle, the Uni-Lions’ are likely to run out of patience with him.

There could be some lights at the end of the tunnel for the young left-hander. Based on the spring training report from January 13, the coaches are quite happy with Lin Tzu-Wei’s condition so far.

“Out of all the pitchers, Lin is among those that I am not worried about,” said the Uni-Lions’ bullpen coach. “I had to tell him to slow down a bit during the spring training, as the season starts in March, not January.”

According to Lin Tzu-Wei, the goals this year is to focus on the stability of his breaking pitches.