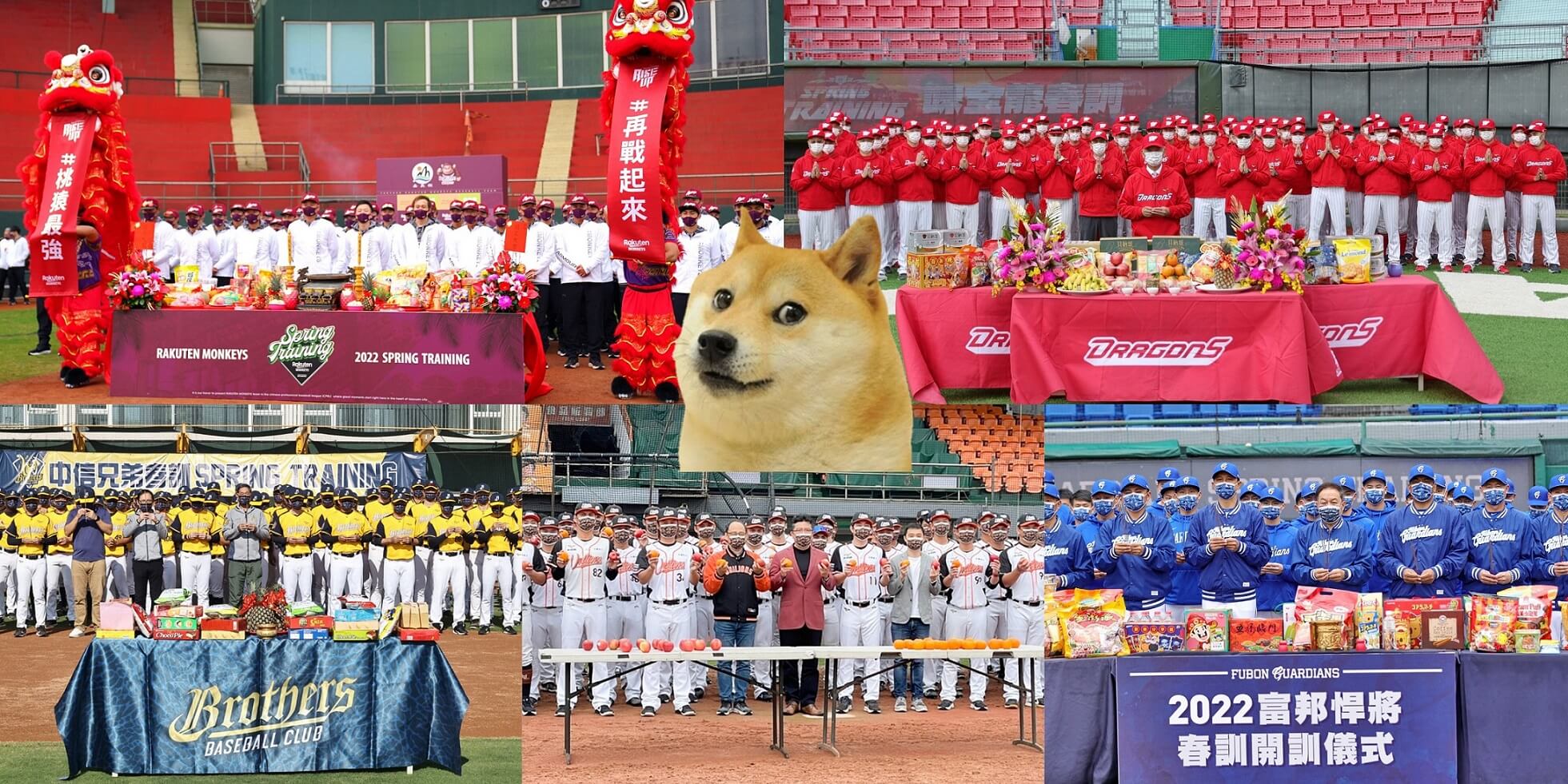 Bring out the folding tables from the storage room and send the interns to the nearby supermarket to buy food. Because it is the first day of the 2022 spring training, it is time to make the baseball gods happy!

As per tradition, all five CPBL teams have prepared their offerings to various gods and deities, hoping for good health, a successful season, decent financial success and great clubhouse harmony.

By the way, I am by no mean a folk religion expert, but here is a not so serious review of each team’s offerings to the baseball gods. I will be scoring this based on a five-star rating system. 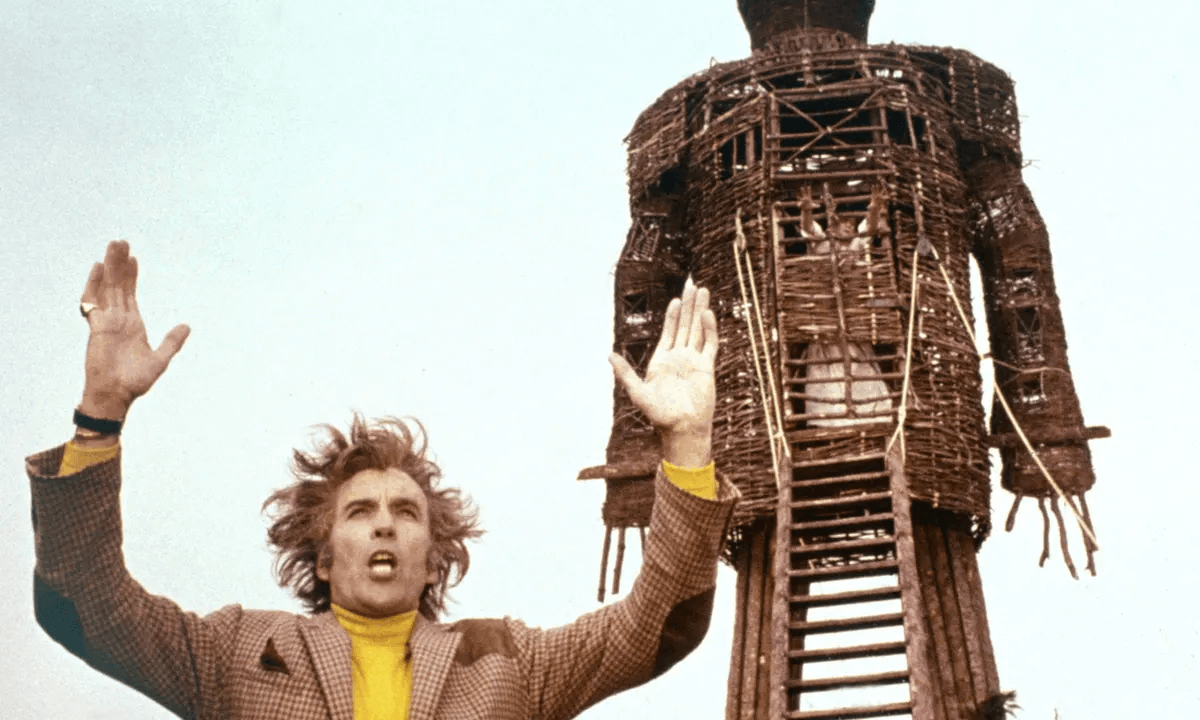 Despite being an expansion team, the Wei Chuan Dragons know how to make an offering to gods. The team have put together an advanced multilayer table arrangement with a great mixture of snacks, drinks, fruits and flowers.

That wedge-shaped table arrangement, just like a charging cavalry, can surely pierce through all the obstacles along the way and deliver the team’s gratitude straight to the baseball gods.

It is worth noting the Dragons actually don’t have a lot of stuff on their tables, but it looks exceptionally presentable due to their excellent displaying method.

Using a baseball analogy, it is like having 50 quality swings instead of having 1000 poor swings during practice. 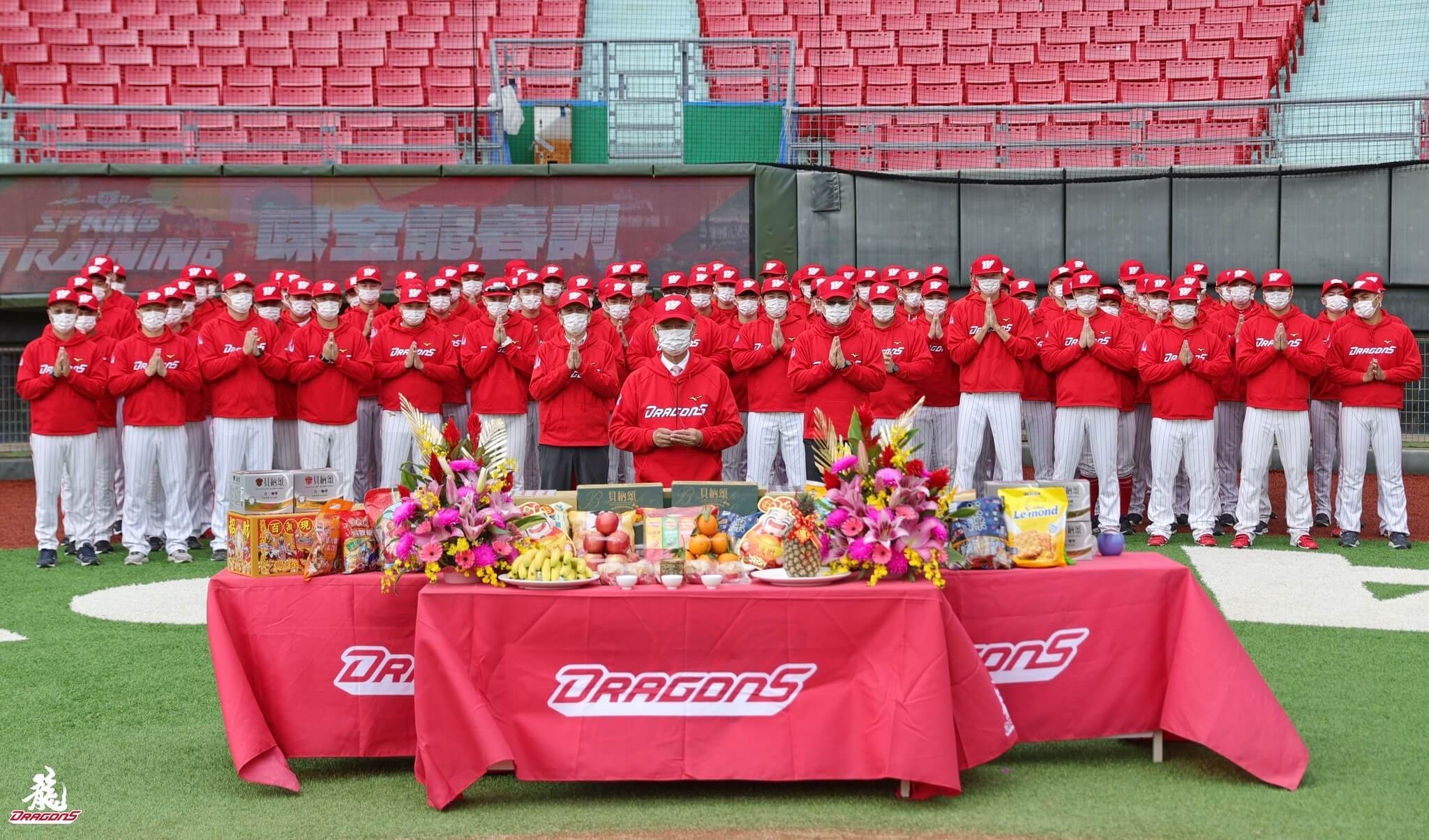 Traditionally speaking, the Monkeys are pretty familiar with mixing religion and baseball. After all, they did invite a real Taoist Priest to attend Game Seven of the 2015 Taiwan Series.

The Rakuten Monkeys’ offerings are very solid. The team have done a bang-up job with their food selection.

The overall table presentation is quite good too, but if I have to nitpick, the snack arrangement on the right seems a bit too crowded and messy with zero room to breathe.

The Monkeys will score some extra points for going the extra mile by having Lion Dance at the ceremony. Also, just take a look at the size of that incense burner in the middle of the table. That giant burner can probably hold at least 2000 incense. 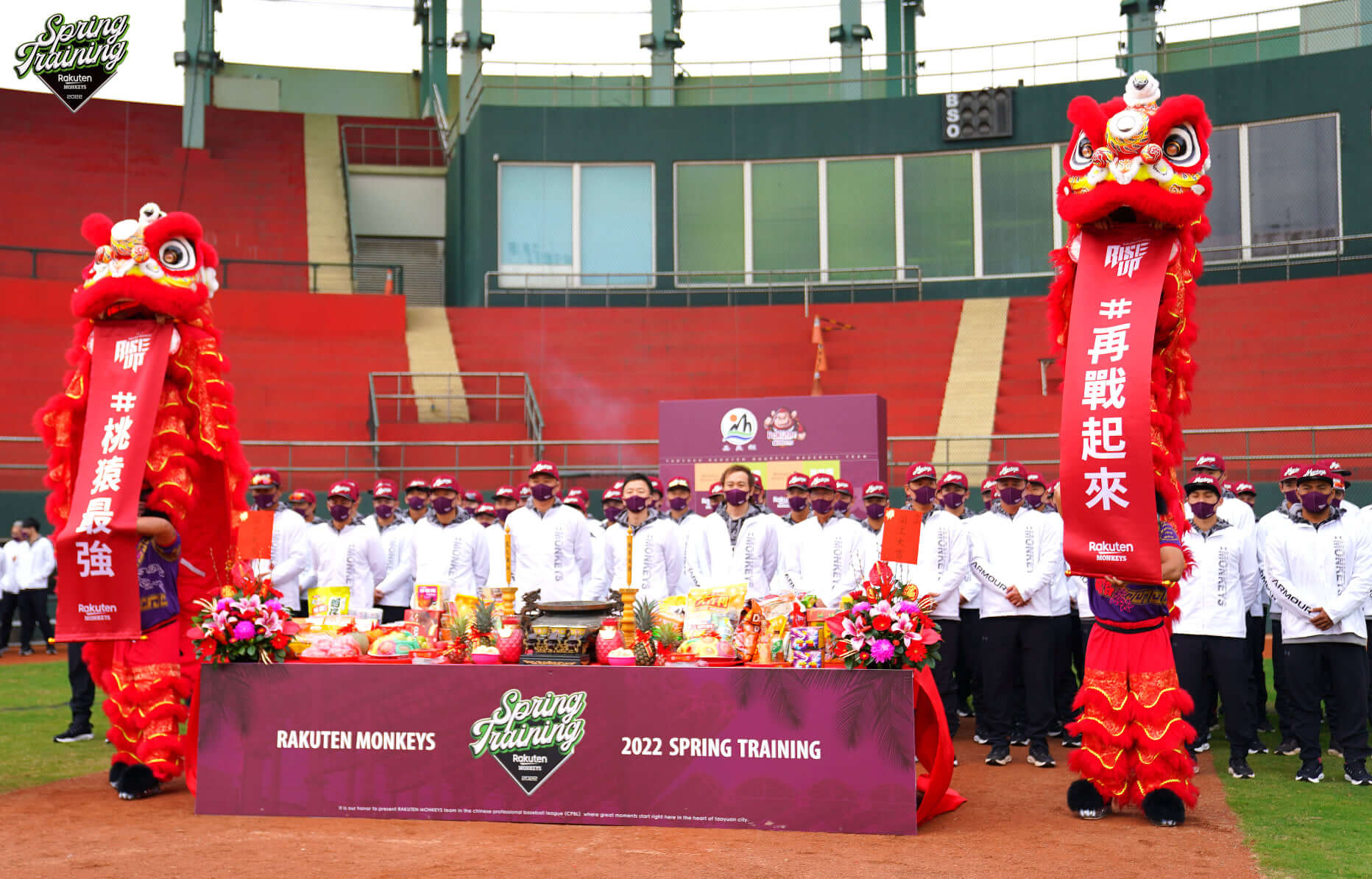 They are aiming for mediocrity. That is my first impression when looking at the Fubon Guardians’ photo.

Just like their uniforms and visual designs, the Fubon Guardians’ offerings to gods are very vanilla, safe and boring. It is simple, nothing to write home about, but presented in an acceptable way and gets the job done.

If we are using a baseball analogy, the Guardians’ offerings are like a bench player with a wRC+ between 87 to 95. He is not bad enough to get cut, but also not good enough to be in the everyday starting lineup. 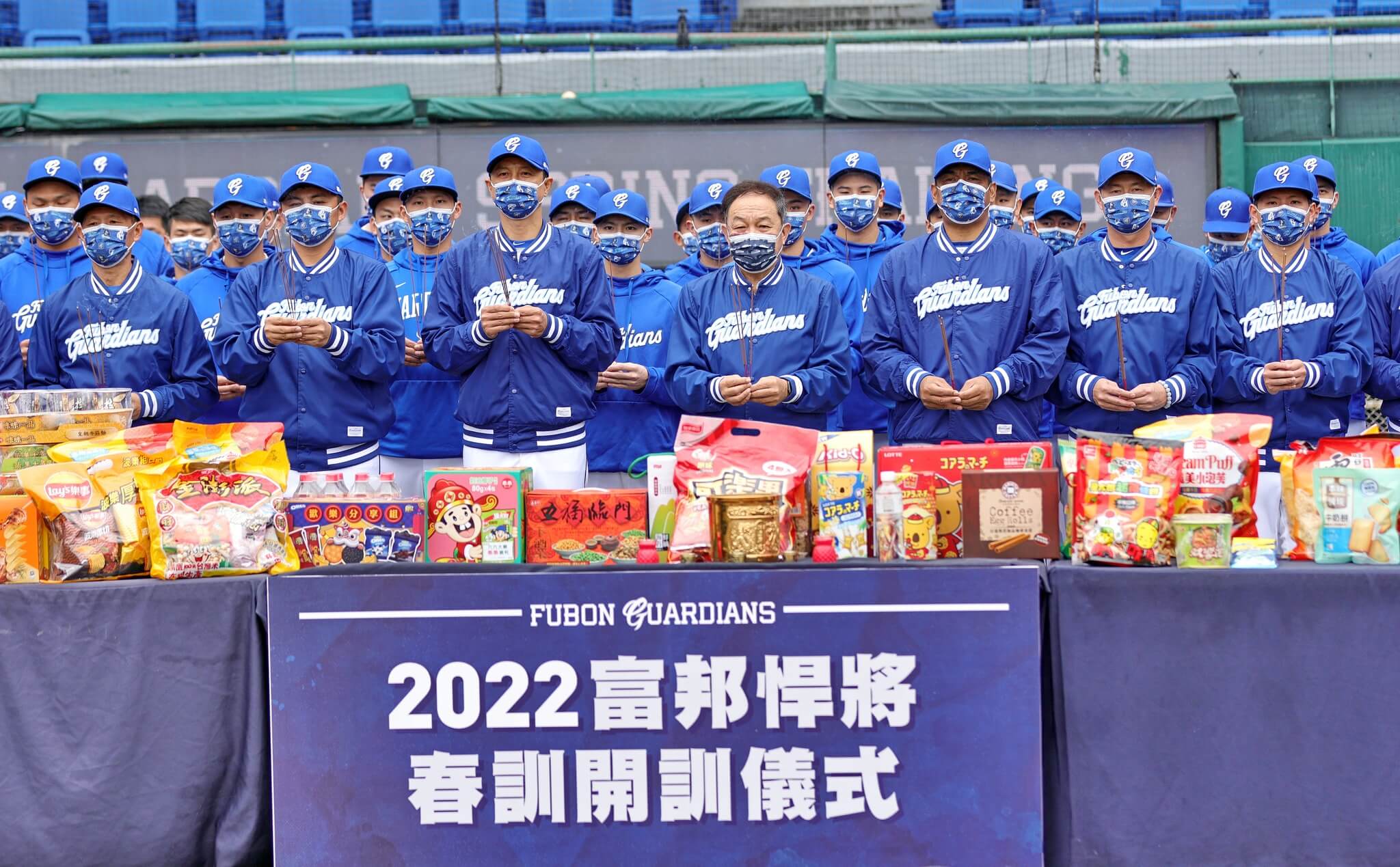 It is sad to see the CTBC Brothers, the Champions of the 2021 Taiwan Series, failed to deliver anything special with their offerings to the baseball gods.

The overall table presentation is just plain awful. All the snack packaging are stacked horizontally. What they should be doing instead is to stand all the packing up vertically.

The Brothers organisation seems to have forgotten this is an offering to gods. It is not laying bricks. 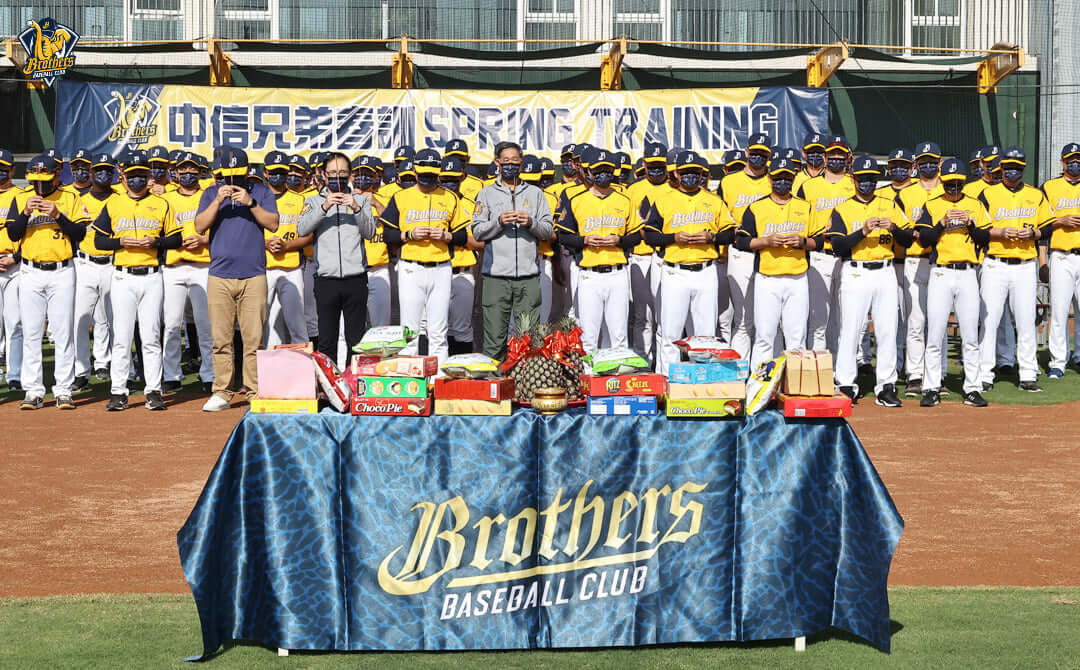 Um… talk about in a move likely to anger the baseball gods.

Honestly, I don’t even know what to say about the Uni-Lions’ offerings to the baseball gods. This doesn’t look like the offerings from a multi-billion conglomerate.

For goodness sake, the Uni-President Enterprises own 7 Eleven in Taiwan. I’m sure it is not hard to buy a few packs of the snack and just lay it on the table.

Another suggestion is to remove the table before taking a photo. Because having an almost empty table is just look bad for the team. Alternatively, maybe buy more fruits and fill up the table again before taking the photo.

The heart is there. Unfortunately, the team did not think ahead before snapping that PR photo. 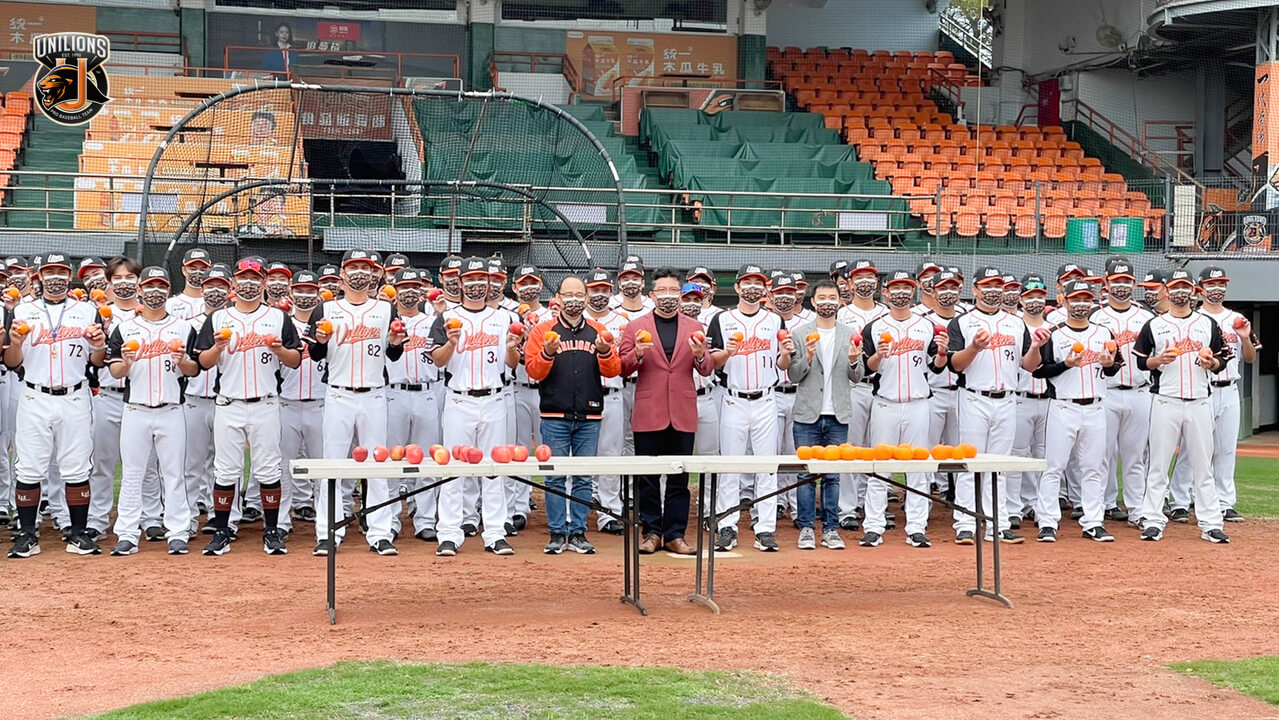