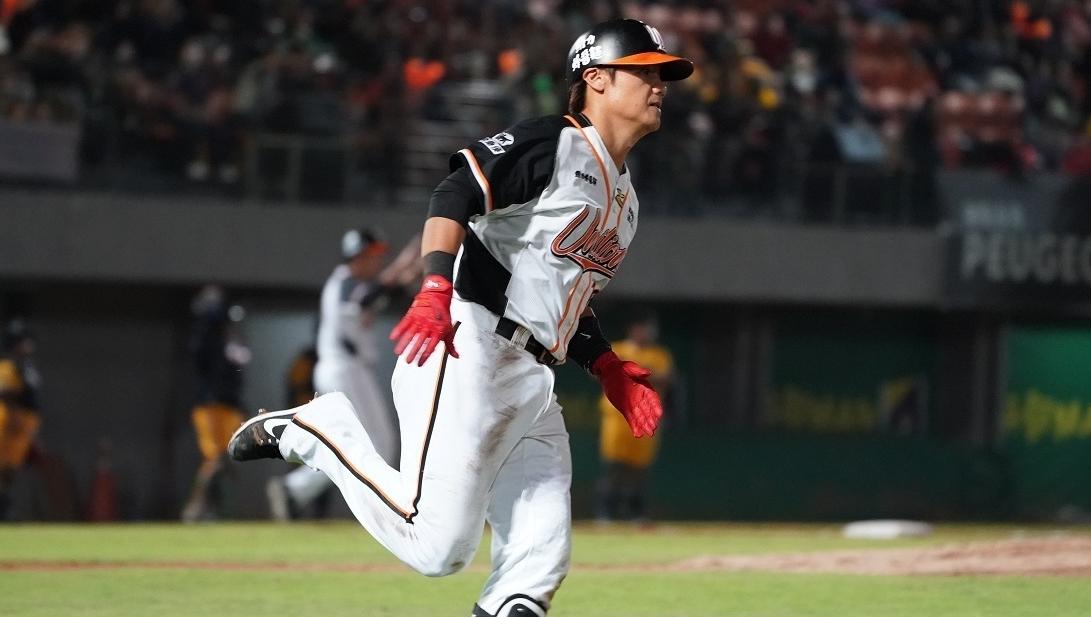 The Uni-Lions have tied the 2017 CPBL Playoff Series 1-1 with the clutch RBI double from from veteran 陳鏞基 (Chen Yung-Chi) in the bottom of 7th, and secured game 2 of the best-of-five Playoff Series with a 8-5 comeback win over Chinatrust Brothers.  Chen’s final line was 3-for-4 with 2 runs and 3 RBI and was awarded the MVP of game 2.

“Our hitting coach kept telling me to just focus on the pitch that I like and try not to overthink it.  See something you like? Take a swing at it.  Just think of it as regular season game”  Said the game 2 MVP Chen Yung-Chi.

“Credits to our starting pitcher 潘威倫 (Pan Wei-Lun), who was able to minimized the damage of bases loading jam to only 2-run.  It gave us some breathing room and our lineup was able to make a comeback because of that”  Said Uni-Lions skipper in the post game interview.

Despite always falling behind, Lions lineup was able to keep up with the Brothers in the early part of the game.  With Brothers inexperienced bullpen unable to protect the lead, Lions continue to capitalised further in the 6th, 7th and 8th inning.

Uni-Lions offensive surge started with 陳傑憲 (Chen Chieh-Hsien) tying the game with a 2 RBI single in the bottom of 6th, followed by timely hits from the veterans 高國慶 (Kao Kuo-Ching) & 陳鏞基 (Chen Yung-Chi).  The veteran duo each collects 3 hits of the night and was the backbone of the Uni-Lions offense.

Lions setup man 邱浩鈞 (Chiu Hao-Chun) got himself into a bit of a jam after letting the first two batters to reach on base safely in the 8th inning.  Closer 王鏡銘 (Wang Ching-Ming) then was bought into the game early and successfully defused the situation with a pop-fly and a 6-4-3 double play with only 3 pitches.

Wang continues his dominance over Chinatrust Brothers’ batters in the 9th inning, where he strikeout the side and secured G2 of the CPBL Playoff Series for Lions.

Both starting pitchers pulled early.  See them in G4/G5?

It’s interesting to see both Brothers and Lions management did the similar thing with their starting pitchers by pulling them out early in the 5th inning.  Brothers’ Orlando Roman was pulled with 89 pitches, while Uni-Lions 潘威倫 (Pan Wei-Lun) clocked out with only 80 pitches.

So, does that mean we’ll see both of them either making an appearance as reliever in G4 or as starting pitchers in G5?

For game 3 of the 2017 CPBL Playoff Series. Chinatrust Brothers will send out LHP 洪宸宇 (Hung Chen-Yu), while Uni-Lions will have foreign pitcher Michael Nix on the mound.