It is a big deal in professional baseball winning the Triple Crown. But can you imagine a 24 years old kid winning the Quadruple Crown title? For the Lamigo Monkeys’ 王柏融 (Wang Po-Jung), he will most likely become the first Taiwanese player to earn this prestige achievement in 28 years of the CPBL history.

A few years ago, if anyone told me that a CPBL sophomore would be taking home the Quadruple Crown title, I would take it as nonsense. As it is such a hard things to do and there had been only one person in 28 years of the CPBL history that was able to achieve that.

The Man With Superhuman Strength

Jay Kirkpatrick, also nicknamed as “The man with superhuman strength” to many baseball fans in Taiwan was signed by the Sinon Bulls back in 1998. Kirkpatrick quickly dominated the league in all hitting categories with the stats of .387/.516/.732 while leading the league in hits (137), home runs (31) and RBI (101). He finished the 1998 season winning the Quadruple Crown and was named the MVP of the year.

Despite his monster season in 1998, Kirkpatrick was not able to repeat his success in 1999, as other teams had figured out his weakness and started pitching him low and inside. Kirkpatrick finished the 1999 season with disappointing stats of .234/.362/.331 with three home runs and was eventually released by the Bulls.

New Quadruple Crown in the Making

With only one game remaining in the 2017 season, Wang Po-Jung is currently dominating the individual batting leaderboard. Based on the latest stats on October 9th, it is safe to say Wang pretty much has the Quadruple Crown in the bag (AVG, H, HR, RBI). 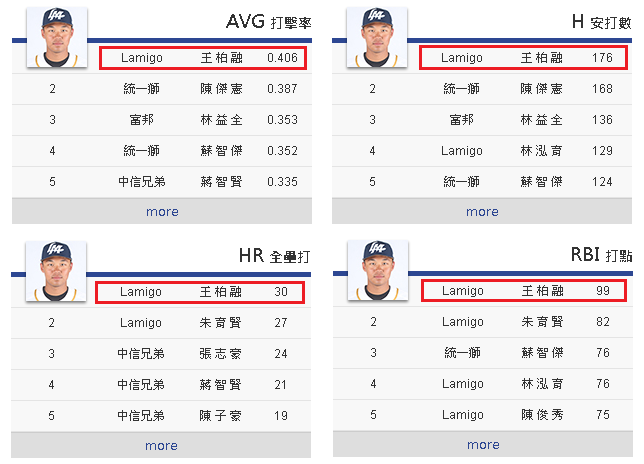 If we take a look into his 2016 and 2017 performance, we could see that he is transforming himself into a power hitter. What’s even more surprising is that he has done that without sacrifice his batting average and OBP.

No More Juiced Ball? Not a Problem

In 2016, rumour has it, that the CPBL ball elastic coefficient was switched to a higher number, which may directly influenced the league overall hitting stats across all categories.

In 2017, The elastic coefficient went back to normal, and we can see a dip in overall offensive stats in the league. Many former “sluggers” has returned to normal this season, but that’s not the case for Wang Po-Jung. His IsoP is currently ranked second in the league, just slightly behind teammates 朱育賢 (Chu Yu-Hsien) who’s sitting at .303.

Are we going to see the first Taiwanese player winning the quadruple crown title this year? We will find out on after Wednesday’s game.