It was a hard fought battle, but the Uni-Lions has done it! The team defeated the Fubon Guardians 9-8 in Game Four of the 2018 Playoff Series. After five years of absence, the Tainan based team will once again be at the Taiwan Series.

“Credits to our backup players Mai Chia-I and Kuo Chun-Wei, they were able to fill in on such short notice and still perform,” said Uni-Lions’ manager Huang Kan-Lin. “Despite our win tonight, we are still not satisfied, we want the Taiwan Series Championships.”

Game Four was your typical CPBL high-scoring slugfest as both teams combined a total of 24 hits and 17 runs. Both starting pitchers got knocked out early, and it was all hands on decks with the bullpen.

The Guardians came into the fourth inning with a 4-2 lead, and it started quite well too with an easy first two out, it seems like a straightforward 1-2-3 inning. And of course, that when everything went south for the Guardians. 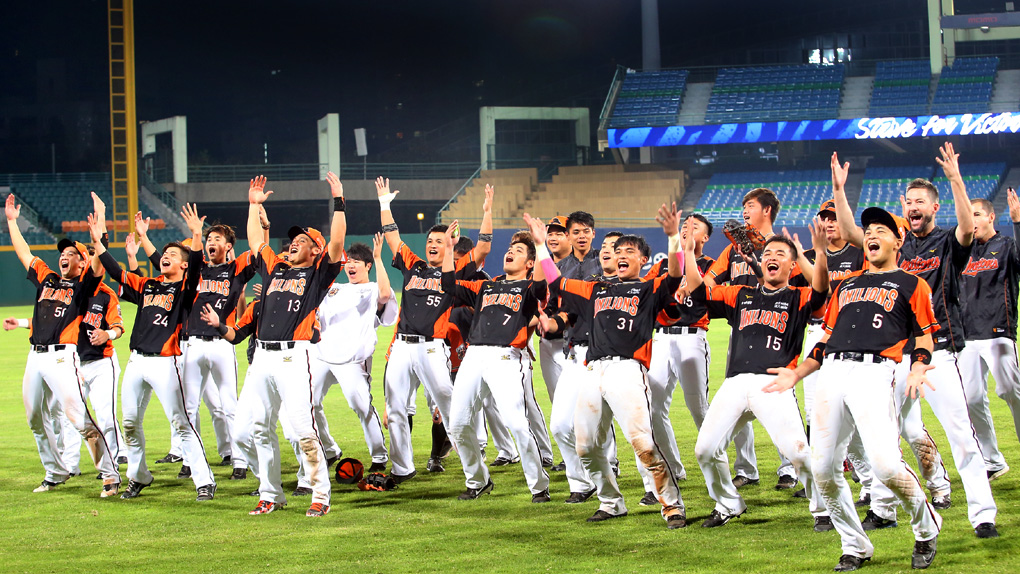 The Uni-Lions’ lineup started their two outs rally with a single, followed by a ground rule double down the line and a walk. In just 13 pitches, all of a sudden, the Guardians were in a bases-loaded jam facing one of the CPBL’s best hitter 陳傑憲 (Chen Chieh-Hsien).

Chen Chieh-Hsien, the 2018 hits leader, hit a single down the middle which drove in the game-tying run. With the CPBL being the CPBL, the Guardians infielders decided to have a defensive meltdown in the most crucial game of the year.

The Guardians’ catcher cut-off the throw from the centre fielder and tried to throw out Chen who was gunning for the second base. Instead, he overthrew it and tossed it back to the centre field.

The centre fielder picked up the ball once again and threw a bullet back to the home plate hoping to catch the go-ahead run, but the pitcher who was covering the home plate at the time did not field the ball cleanly and let it rolled all the way to the back.

Just like that, a single followed by two errors, Chen Chieh-Hsien with the help of Guardians infielders has cleaned the bases. The Uni-Lions are now ahead 5-4, and this ultimately cost the Guardians the game.

陳傑憲 (Chen Chieh-Hsien) cleared the bases to put the #UniLions ahead 5-4. Chen also made it to the third base with the Guardians' infield blunders. #CPBL #PlayoffSeries pic.twitter.com/J4bG6kHNc8

Guardians’ Late Rally, but Too Late

The Uni-Lions and the Guardians each scored a few more runs from fifth to seventh. And the Uni-Lions was leading 9-7 coming in the bottom of the ninth.

Facing elimination, the Guardians put up a late rally with an RBI double from Kao Kuo-Hui to make it a 9-8 ball game. But it was too late for them. The Uni-Lions closer slammed the door on the Guardians by struck out the final batter.

With the 2018 Taiwan Series ticket in hand, the Uni-Lions will face the reigning champion the Lamigo Monkeys for a best-of-seven series starting October 27. The Monkeys will have a one win advantage coming into the Taiwan Series.

#UniLions punch ticket to the 2018 Taiwan Series by winning Game 4 of the Playoff Series 9-8 over the Guardians. #CPBL #PlayoffSeries pic.twitter.com/7mKSssNikf

Other Moments from G4 of 2018 Playoff Series

Here are some collections of the fun moments and nice plays from Game Two. Instead of doing a proper write-up, it is easier and faster for me to dump everything in this section. So, enjoy!

If you're not down with that, we got two words for you.. The #UniLions channelling their inner WWE after securing a spot in the upcoming Taiwan Series. #CPBL pic.twitter.com/pcwOXHKyT9