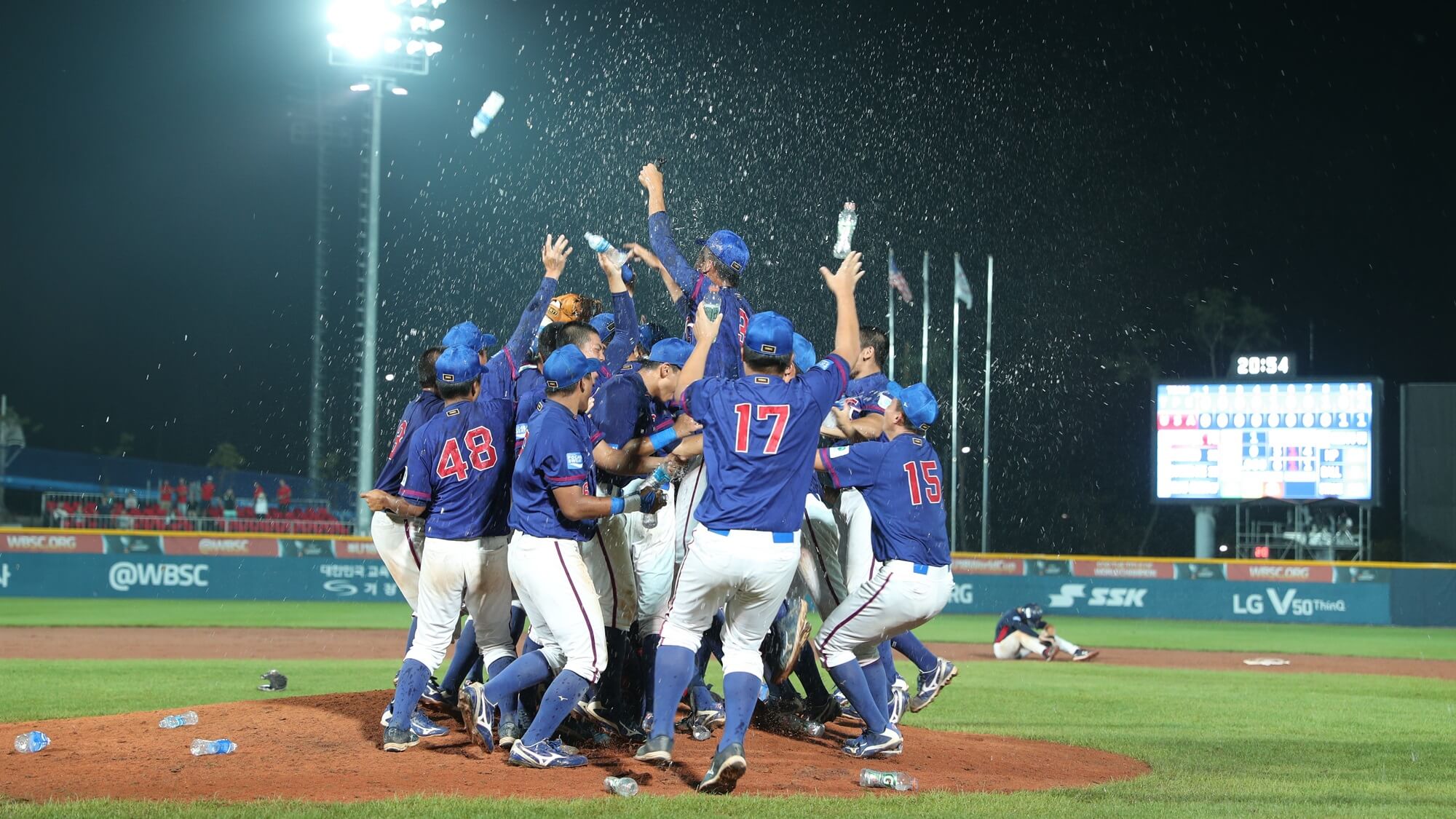 After nine years, Taiwan has once again crowned as the World Champion in the 2019 WBSC U-18 Baseball World Cup.

After defeated the long-time regional rivals Japan and Korea, team Taiwan managed to secure a spot in the gold medal game against the defending champion the USA.

After nine innings of a hard-fought battle, Taiwan came out on top by defeating the USA 2-1. Starting pitcher 余謙 (Yu Chien) was named the tournament MVP by the WBSC.

Yu Chien played a vital role in Taiwan’s victory over the USA. The right-hander shut down team USA’s offence by tossing 6.2 scoreless innings on 92 pitches. He allowed three scattered hits with no walks and struck out seven in the process. Velocity wise, Yu’s fastball sat around 146kph and topped out at 150kph.

“I prayed and asked my dad who passed away to cheer for me in the championship game,” said Yu Chien. “If wasn’t for the blister on my finger, I could have kept going and pitch beyond 6.2 innings.”

“I will head to university after the tournament and continue to develop myself as a player, and hopefully I will get the overseas opportunity either in Japan or the USA.”

[U-18 Baseball World Cup] 余謙 (Yu Chien) secured the victory for team Taiwan by striking out 4 across 2 innings of relief work. #TWHSBaseball pic.twitter.com/UMBM8LhvaM

Taiwan’s Journey to U-18 World Champion

Notes and Highlights From the Tournament

Taiwan’s highly touted pitching prospect 陳柏毓 (Chen Po-Yu) attracted plenty of scouts during the tournament. Chen started two games against Panama and Korea. He also closed the game in the gold medal game against the USA.

16-year-old 林昱珉 (Lin Yu-Min) is another key player in this tournament. The young crafty left-hander pitched a total of four games and posted a 0.64 ERA across 14 innings of work.

He completely shut down Australia in the super round and carried a perfect game into the fifth inning. He finished that game tossing six scoreless innings with five strikeouts and only used 72 pitches.

Apart from the firepower, Lo Wei-Chieh also showcased his defensive ability as both catcher and outfielder. During the gold medal game against the USA, Lo made two outstanding diving catch in the left-field and robbed two extra-base hits.

[U-18 Baseball World Cup] Taiwan's 羅暐捷 (Lo Wei-Chieh) stole home after seeing a teammate got hit by a pitch. pic.twitter.com/bTjFWiUcj6

Infielder 李灝宇 (Lee Hao-Yu), who recently turned 16 years old had shown plenty of potentials. Lee who is known for his raw power batted cleanup in this tournament and posted a .300/.444/.400. A lot of hard-hit balls, but just unlucky with the locations or being robbed by nice plays.

Leading up to the U-18 World Cup, Taiwan played four warn up games against the USA in Taiwan. According to the TrackMan data from that series, Lee’s exit velocity averaged 91.6mph and maxed out at 103mph.

[U-18 Baseball World Cup] According to Team Taiwan's manager, 16-year-old cleanup hitter 李灝宇 (Lee Hao-Yu) is likely to miss the rest of the tournament due to swollen wrist on a hit-by-pitch.😭#TWHSBaseball pic.twitter.com/zb4qbuPNkM

Another highly touted pitching prospect 李晨薰 (Lee Chen-Hsun) also made an appearance in the tournament. However, only as a positional player for one at-bat.

There are rumours Lee was not feeling well and was not 100% ready for the tournament due to fatigue. Lee stands 199cm (6’5) and can reach 153kph with his fastball.

[U-18 Baseball World Cup] Taiwan's highly touted pitching prospect 李晨薰 (Lee Chen-Hsun) finally made his debut in the tournament, but as a positional player. The 17-year-old hard-throwing righty stands 198cm and can reach 153kph (95mph) with his fastball. #TWHSBaseball pic.twitter.com/TCUYeKQsrM