The Taiwanese baseball season is upon us once again, with the 2018 CPBL season starting on the 24th of March. The 2018 Opening Day match up will feature the 2017 Taiwan Series Champion the Lamigo Monkeys taking on the Chinatrust Brothers at the Taoyuan Stadium.

After dominating the entire 2017 season by winning both the first and second half season championship. The Lamigo Monkeys went into the 2017 Taiwan Series with a one game advantage over the inexperience Chinatrust Brothers squad.

Despite dropping game one against the Brothers. The the Monkeys veterans managed to settled down by winning the the next three games to successfully captured the 2017 Taiwan Series.

How to Watch the CPBL Games

There are many ways to watch the CPBL games during the season, either via the traditional TV broadcast or through several online streaming services.

For the non-Mandarin speaking CPBL fans, here are the complete English rosters for all the teams in the 2018 season, along with their uniform number so you can match it up as you watch the game.

We put together a list of things to watch for, along with some quick facts to get you ready for the 2018 CPBL season.

Year of the Guardians?

After the disappointing inaugural season (Finished last with 48-2-70), the Fubon Guardians went on a shopping frenzy in the free agent market with several major signings, which provide them a huge boost in their batting lineup and the pitching depth. 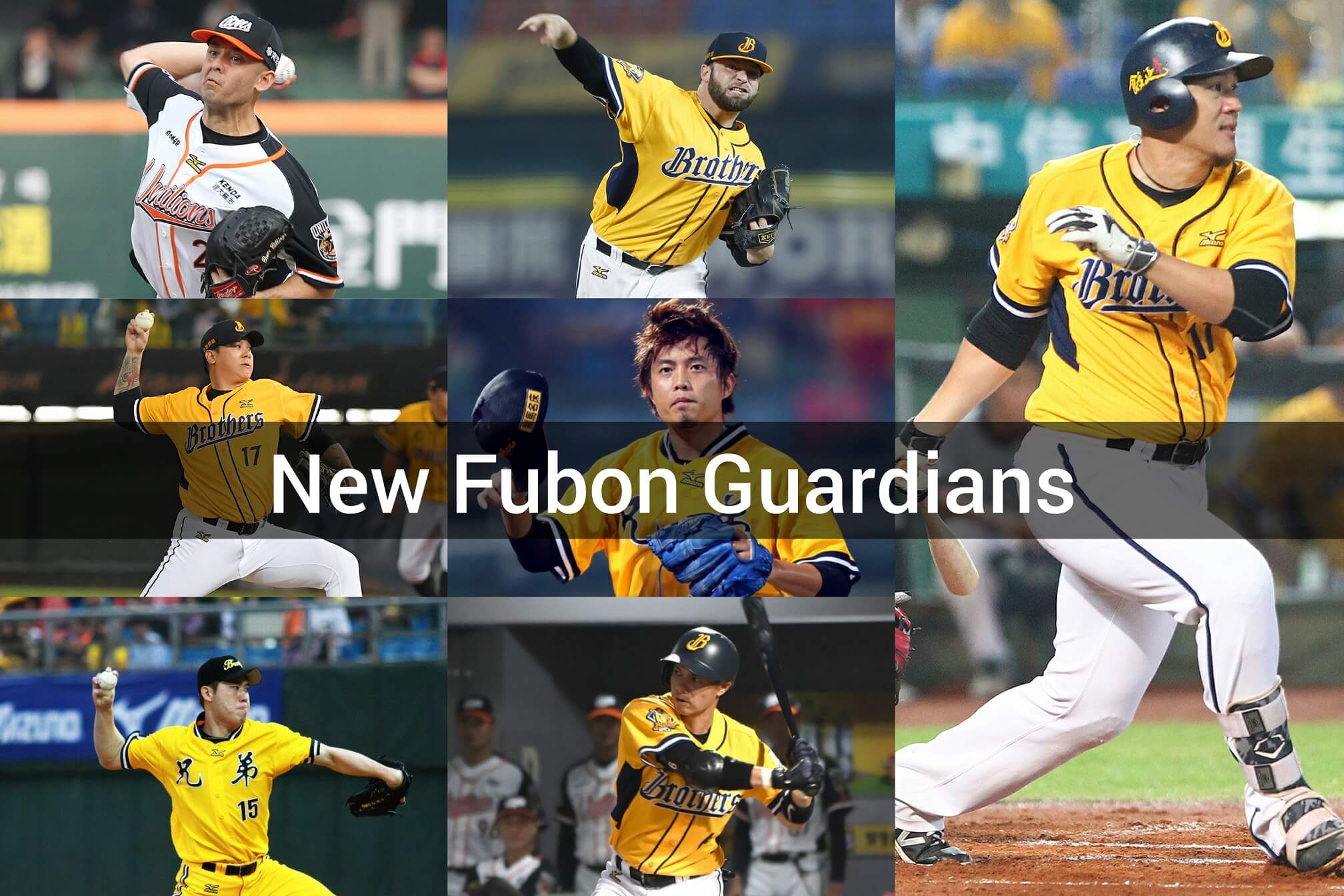 It has been a quite an interesting offseason, with each teams trying to poach each other’s foreign players under the table.

There is a saying in the CPBL, having good foreign players can win your the championship, and it was certainly the case for the 2017 Lamigo Monkeys. Looking deeper into the stats, out of the Monkeys record breaking 78 wins, the three foreign pitchers Zeke Spruill, Darin Downs and Zack Segovia have contributed 41 wins.

So for those foreign players that are well adjusted to playing baseball in Taiwan, they tend to become the hot properties during the offseason. As re-signing or poach them is almost a risk-free investment for the team. 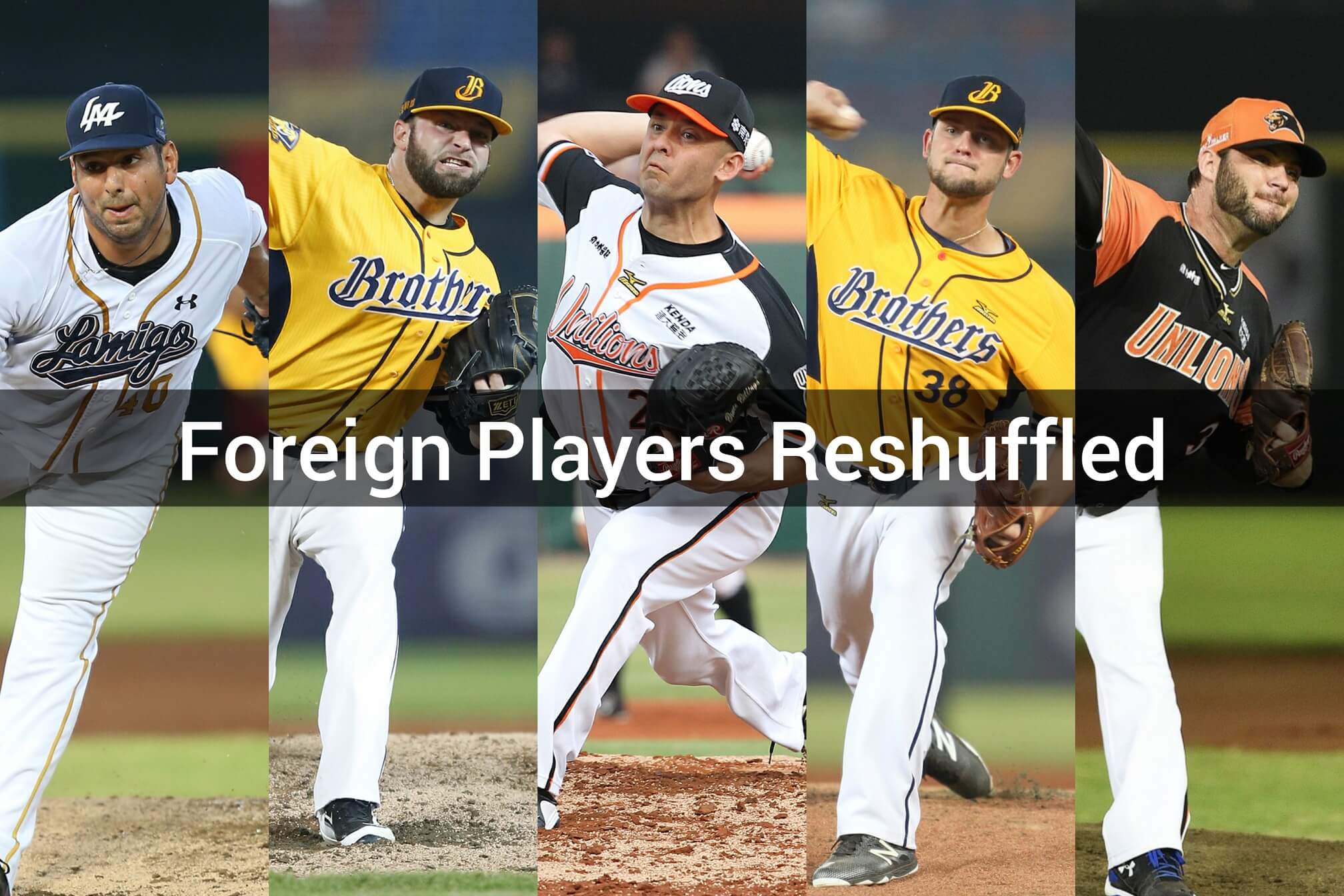 After hitting over .400 in batting average and winning the CPBL MVP for two consecutive seasons, How is the 2017 CPBL batting Quadruple Crown winner 王柏融 (Wang Po-Jung) going to perform in 2018?

According to the CPBL regulations, Wang Po-Jung will be eligible for international free agency after the 2018 season. This mean Wang will be able to sign with any NPB and MLB teams if the Lamigo Monkeys are happy with the posting fee.

The Drama Between Lin Chieh-Sheng and Cory Snyder

Ever since the beginning of the season, there have been plenty of rumours about the Chinatrust Brothers billboard star 林智勝 (Lin Chieh-Sheng) and the manager Cory Snyder did get get along well with each other.

About half way through the season, Lin Chieh-Sheng and several other high profile Brothers players were either got sent down to the farm team or benched and left out of the Brothers post-season roster for disciplinary reasons.

Now the question everyone is asking is, will Lin Chieh-Sheng be able to play in the first team this season? Or will the Brothers management continue to bench him and leave him in the farm league?

It’s never too early to look ahead and see what personal milestones are within reach in 2018. Here is the full list which we break it down by team and will continue to update it throughout the year.

CPBL By the Numbers

Here is a fun one. Out of 227 Taiwanese players in the 2018 CPBL season. Here are some of the overall stats across the entire league. For more players data, you can find it on the English rosters and league overview page. 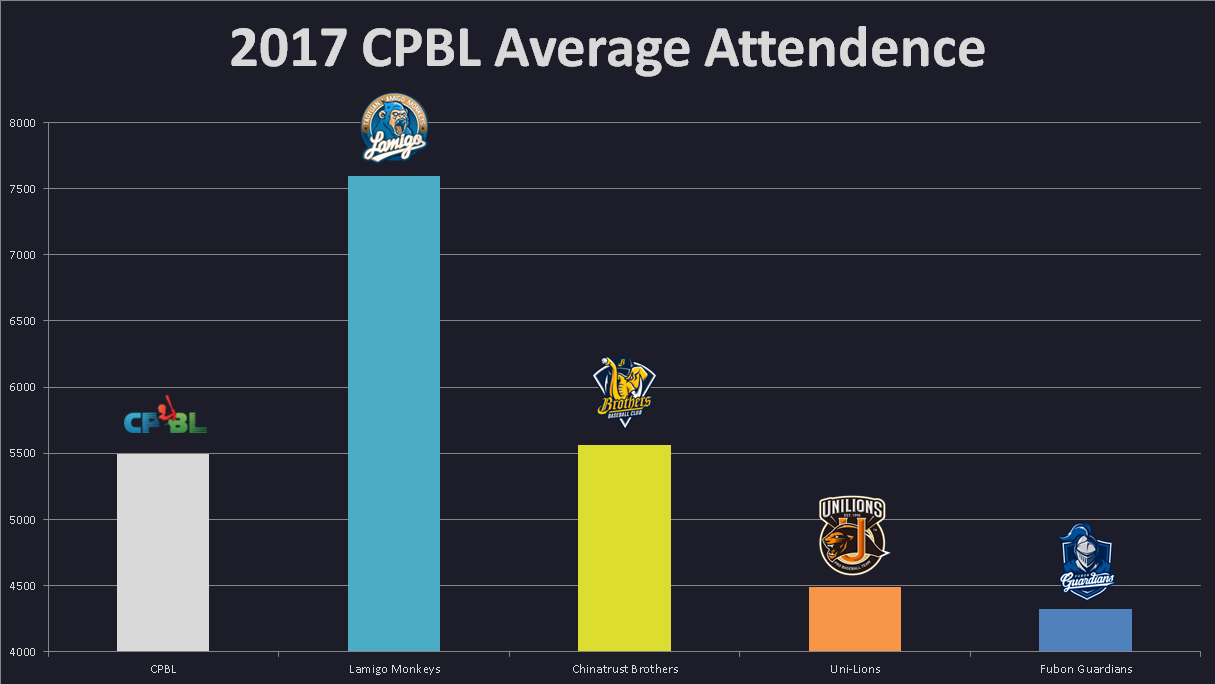 The CPBL have come a long way, from the initial golden day to the game-fixing dark era (Lasted until 2009) and now the rebuilding era where the overall attendance is slowly coming back up once again.

The 2018 CPBL season will have the following former MLB players. To keep the list short and manageable, we won’t list players only with minor league experience.

For the last few seasons the league’s policy has allowed each team to have up to three foreign players. Generally speaking, foreign players are mostly from the AAA level with some MLB experience. Here is the complete 2018 CPBL foreign players tracker.

For a foreign players with AAA experience, the salary structure is normally around 18,000 to 30,000 USD a month not including the post game bonuses. Players with extensive MLB experience like Freddy Garcia, they might earn up to 55,000 USD per month. 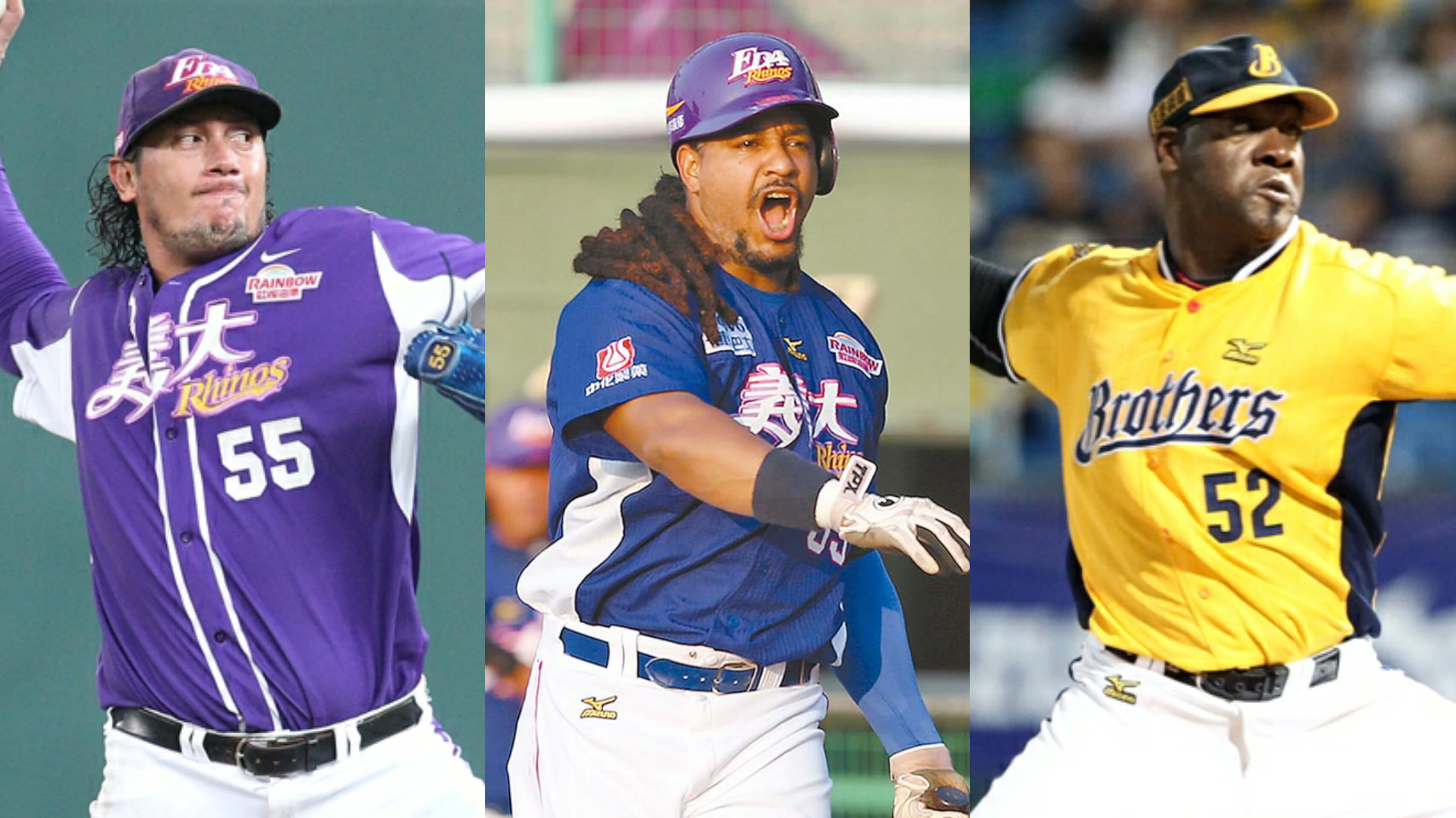 CPBL was established in 1990 with a four teams structure, after several expansions in 1997 Taiwan reached record high of 11 active teams. However, due to a string of game-fixing scandals, the CPBL is now reduced down to four teams since 2009.

Here’s a graphical chart which show the CPBL history timeline.

Each team plays 120 games with 60 games each in the first and second-half season. The half-season winner is eligible to advance to post-season.

At the moment, fans can buy teams merchandise from the stadium shops during the season, the teams online store or visit the physical retail shops.

However, just like the most Asian teams in Japan and Korea, the CPBL teams generally don’t ship merchandise oversea. Unless you are based in Taiwan, or use a third-party post forwarding service, it is pretty much impossible to get your hands on the CPBL teams merchandise.

But if you are based in Taiwan, or have a contact in Taiwan that can ship you the merchandise, then this guide on where to purchase CPBL merchandise will be perfect for you. 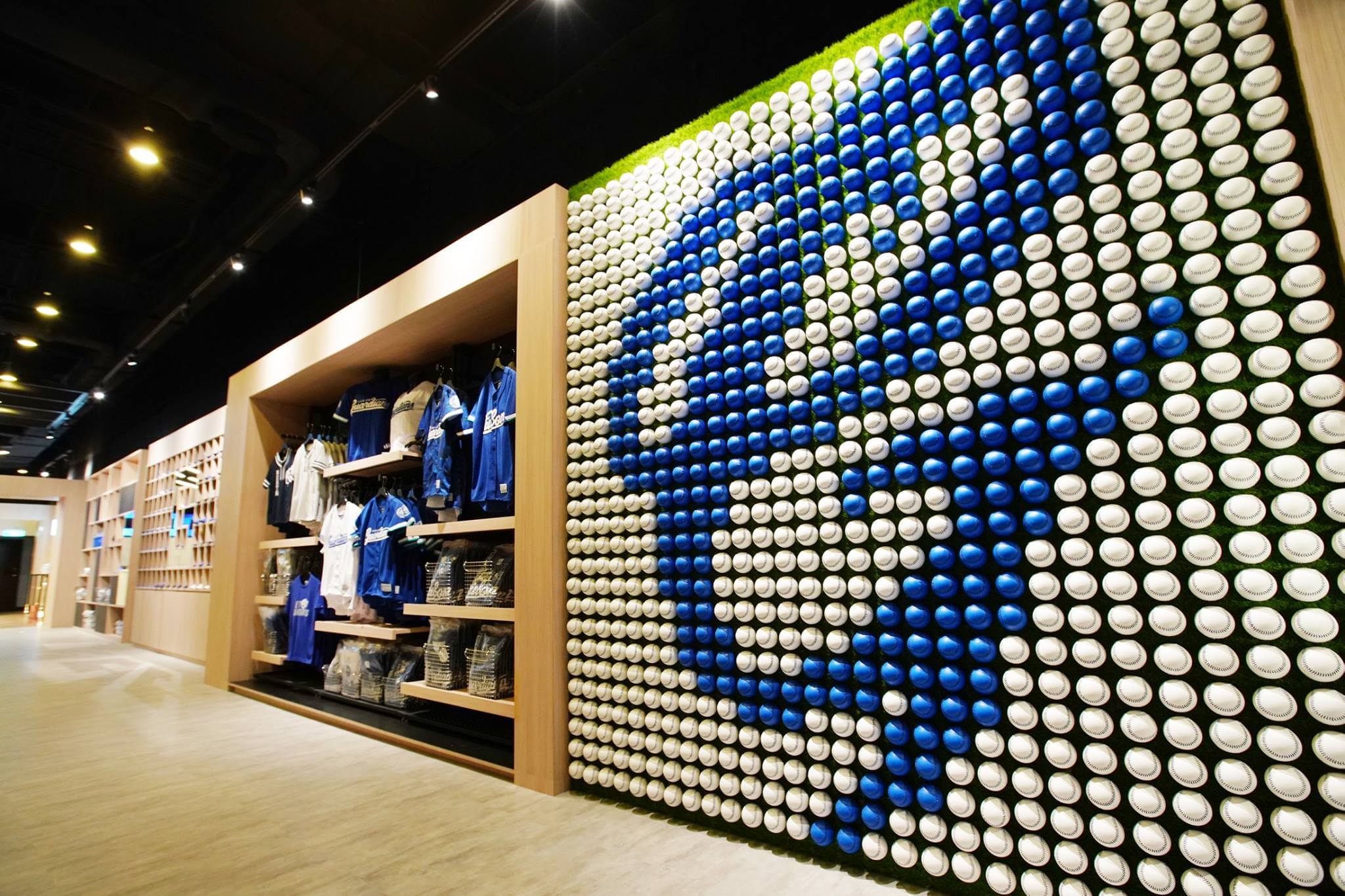