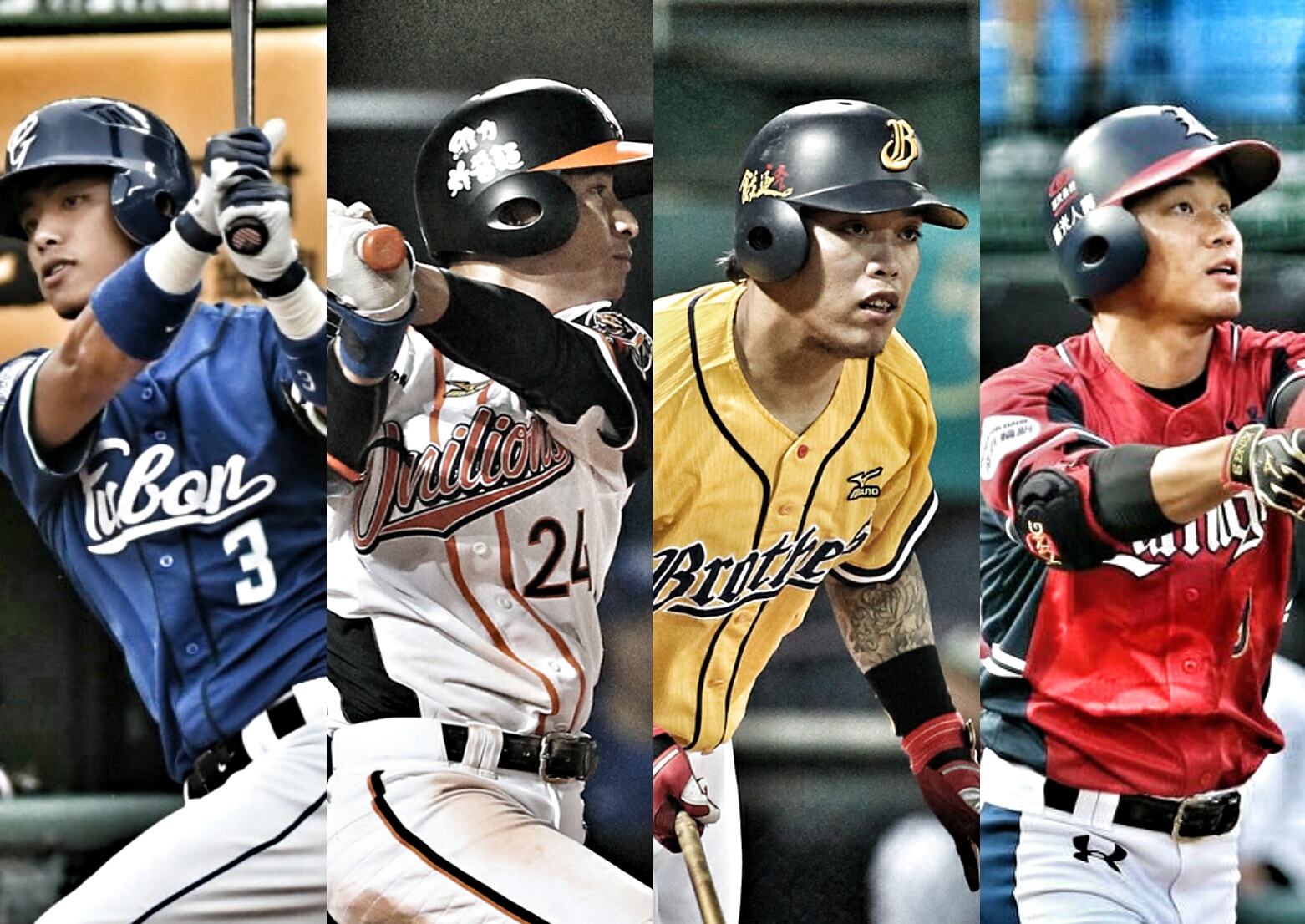 We’re just about half way into the 2017 CPBL season.  It’s perfect opportunity to look into each team’s future “core 4”.  As they will most likely to be the primary players in the future of each of the organisation.

Li was part of the U21 national team in 2014, where he was named the thrid-baseman of the tournament.  He then spend the next 2 years playing for the national development squad representing Taiwan in various international tournaments as a member of the junior national team.

Li got the nickname of “Wonderboy” after hitting 2 walk-off hits in the span of a week in April.  With him signing with the Guardians which covered the 3B gap for the next 10 years, which has always been a problem for Guardians in the past.

As one of the top high school prospect with huge outfield defensive range at the same time can also hit for power.  Shen has been on the radar for many scouts since the student baseball day.

Shen got his first taste of top team when he was briefly call up for about a month to cover Guardians outfield depth.  During that time Shen has been used as the 4th OF and getting the occasional pinch hit in the late innings.

The youngest Brothers in the CPBL Kao family.  Kao was part of the U21 Taiwanese national team in 2014.  Despite being an OF, in order to get more starting opportunity in the top team Kao has started playing as SS and 3B since he turned professional.

Huang captured everyone’s attention last year in the Game 4 of the 2016 Taiwan Series.  Where Huang, as a rookie pitched a 1 run, 5 innings game against the offensive power house Chinatrust Brothers.  Since then Guardians have been trying to develop Huang as the future #4 starter in the rotation.

With all the media attention and the tremendous expectations from Uni-Lions’ fans.  The CPBL heartthrob 陳傑憲 (Chen Chieh-Hsien) has live up to the hype and outperformed the organization’s expectation where he currently lead the league in number of hits and batting average.

Chen is known for his wide plate coverage and the ability to make solid contract.  During the 2017 season, several NPB teams had sent scouts to Taiwan to observe Chen in action.  As Chen went through the Japanese high school system, he won’t be count as a foreign player if he ends up signing with a NPB team.

The 2016 overall #1 pick Su began his 2017 season with a bit of a setback.  As the organisation’s top prospect was sidelined for a month due to wrist injury.

With the string of freak incidents that puts majority of the Lions primary players on the disabled list.  Su has returned to the top team just in time, providing much needed firepower to Lions struggling lineup.  Su is currently ranked #3 in batting average and #2 in the wRC+ leaderboard.

Cheng burst onto the scene last year after hitting 24 home runs and set the CPBL record for most home runs as a rookie.  There are a lot of expectations from the Lions fans to see what the young slugger can do in the 2017 season.

It has been a bit of a disappointment so far in 2017.  As Cheng started the 2017 season with a bang, quickly reached 6 home runs in the first week of April.  But after his hit-by-pitch incident where Cheng was hit on the wrist, and the internal controversy over the firing of hitting coach Bill Springman, Cheng seems lost in the batter’s box.

With a bit of a nudge into the right direction and proper coaching, Cheng will be able to a lot of damage in the Lions lineup.  For the time being, Cheng has been sent down to the farm team for further tuning and hopefully hit his way out of the slump.

Among Uni-Lions new 4 core members, 楊家維 (Yang Chia-Wei) is the most anticipated player.  As Yang’s story is rather different than others and very inspiring to all the players that’s currently in the minor league.

He was the captain of the U18 Taiwanese national team back in 2013 and was drafted by the Uni-Lions in 2014 with the idea of him taking over the primary middle infield position.  Shortly after signing with the Lions, he was diagnosed with chronic kidney disease, and was forced to rest and fight this sickness.

After 2 years of hard work Yang finally made his top team debut in 2017 and being used predominantly as the pinch hitter.  On 6th April, Yang became the hero of the day with a walk-off homer as a pinch hitter in the bottom of the 9th inning.

The hard hitting prospect has been given plenty of opportunity to start in the Brothers lineup since the beginning of the 2017 season.  With such a big responsibility, Chen delivered well beyond the management’s expectations, currently ranked #3 in the wRC+ ranking and ranked #2 in the HR leaderboard with 18 home runs.

On 30th of April, Chen set the CPBL record being the youngest player to hit 3 homers in a single game at the age of 21.  Chen also mentioned in an interview that he would like to play abroad if there’s a chance to do so.

Turning professional as one of the top amateur batter, the former U23 national team outfielder is one of the future outfield star Brothers is trying to develop.

Due to the stacked lineup, Chan started his 2017 season with occasional pinch-hit duty on the top team.  With the recent injury of several Brothers outfielders Chan now have the opportunity to start in the outfield and did not disappoint the management team with the stats of .354/.409/.626

Certainly one of the biggest surprise of the 2017 season.  Being a late-round draft pick and also with Brothers stacked lineup, Tseng has not been given much opportunity in the top team since signing with the Brothers.

In order to increase his chance for making the top team, Tseng started playing outfield in the farm team with the goals of becomes the top team utility player.  With his ability to cover 2B, 3B, SS and OF, Tseng has made the Brothers 2017 opening day roster as back-up / pinch hit player.

Tseng is currently batting .310/.399/.613 with most notable setting the CPBL record with 4 home runs in 4 consecutive at bats earlier in the season.

NO TOP TEAM STATS SO FAR

Chen is definitely one of the top premium high school prospect in 2016 season.  Being a two-way player that’s able to hit 149kph (92mph) on the radar, at the same time able to hit for power.  In 2016 E-Sun tournament, he was one of the few high school players that is able to blast one over the wall using wooden bats.

After setting CPBL record for signing one of the biggest contract as a high school player.  Brothers organisation along with his agency have designed a special developmental plan for Chen which include pitching innings restriction, with the idea of slowly develop the hard throwing youngster as a starting pitcher that’s able to handle top team schedule.

After the remarkable rookie season, “The King” Wang Po-Jung shows no signs of slowing down and continues to grow by setting the record of being the fastest player to reach career 200th & 300th hit.

This season he faces more challenges, as each team starts to apply infield shift against him whenever he is in the batter’s box.  Despite the shift against him.  Wang is still able to hand in a league leading batting average of .404.  His stable and reliable performance has also drew oversea market attention as he was featured in NPB’s Pacific League TV.

You would’ve thought after hitting .414 batting average in 2016 there won’t be much to improve for the kid.  However Wang is somehow still improving, especially in his power department.

So far in the 2017 season we see Wang is hitting his career high in slugging at .693 and the IsoP at .289 which placed him 3rd in the entire league, just behind 陳子豪 (Chen Tzu-Hao) and 蔣智賢 (Chiang Chih-Hsien).

(Side note: the stats we mentioned above might be a little different as we wrote Wang’s profile 1 week before everyone else)

Instead of pursuing more hits and higher batting average, Chu is now focused on deliver more extra base hits and RBI.  His IsoP is 0.277 which is higher when comparing with 2016 at the same time with 15 home runs under his belt which put his his AB/HR rate is at 14.7.

With this new full swing hitting strategy we do see an increase in his K% coming up to 18% however it’s also worth noting Chu still able to maintain his BB/K at 0.63 which is almost identical to last year.

Where to put Chu has always been a problem for Lamigo Monkeys.  As 陳俊秀 (Chen Chun-Hsiu) and prospect 楊岱均 (Yang Tai-Chun) taking up the 1B spot, these day Chu predominately play in the LF.  Being new to the position there’s still a lot more room for improvement when it comes to reading the fly ball.

The young shortstop is currently experiencing a form of sophomore slump as his overall performance has drop quite significantly.  So far in the 2017 season Lin struggled hitting breaking balls on the outside corners of the strikezone.

With Lamigo recently drafted 21 years old national development squad infielder 林立 (Lin Li) who is widely considered to be CPBL ready.  If Lin doesn’t find a way to improve, there’s a chance Lin might gets send down to minor for further development.

Lin got a good defensive range and arm at SS.  But he needs to build stability in his defense throughout the whole season.  The kid is still young and still got plenty of learn, his job at the moment will be just enjoy the game and try to absorb as much as possible using his top team starting opportunity.

Liang has earned himself plenty of opportunity to start in the Monkeys lineup in 2017 season, due to contract complications which leads to the late re-signing of primary 3rd baseman 林智平 (Lin Chih-Ping).

In 2017 spring camp, with the help of guest hitting coach Todd Betts, Liang has changed his hitting strategy.  Since then, Liang has moved away from being a chop ground ball hitter and focusing more on hitting line drives, which leads to an significant improvement to his overall stats and also ending his 4 years no-homer drought (1356 days).