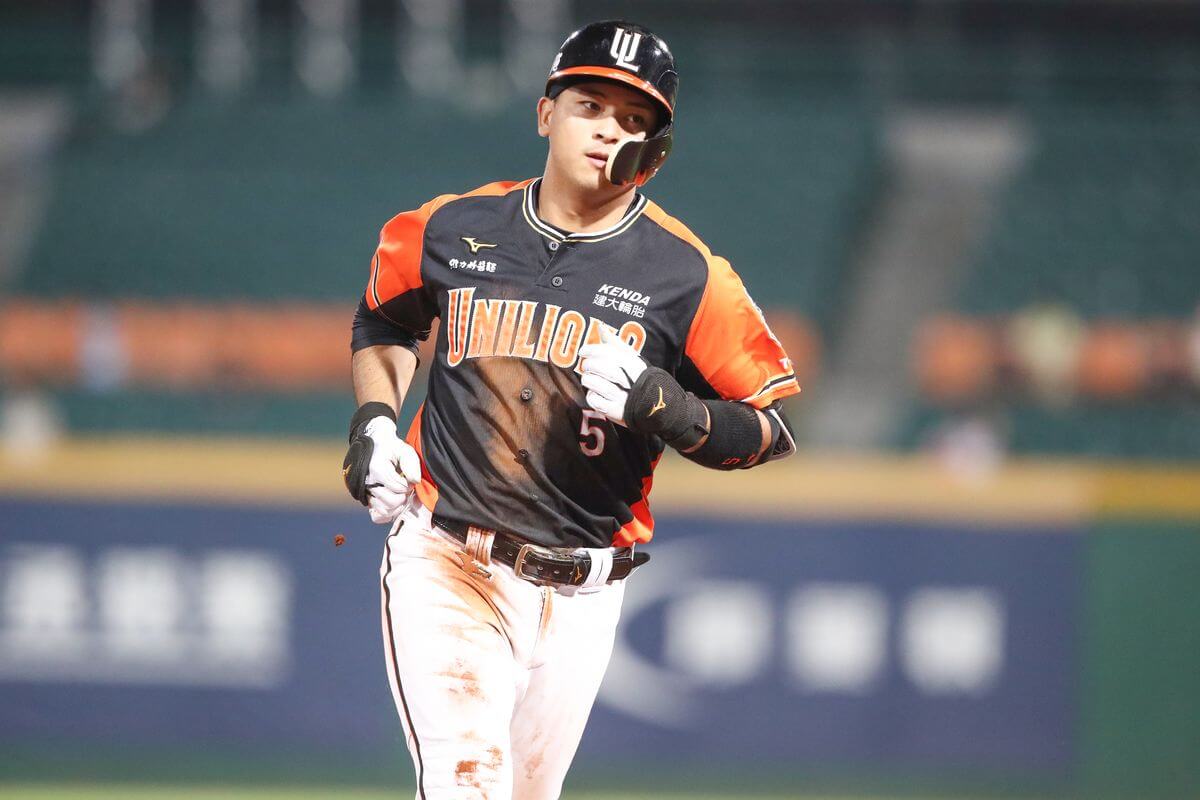 The Uni-Lions had suffered from injuries for the entire 2019 season, which they went 48-2-70 with a .407 winning percentage while their star players Chen Chieh-Hsien and Chen Chung-Yu were out for half of 2019.

It’s reasonable enough to say that Kuo Fu Lin’s performance affects the Uni-Lion’s offensive productivity. The 28-year-old had an outstanding season in 2018 where he crashed 19 homers and a respective 119 wRC+ as the everyday third baseman. Here’s how his numbers dropped from last year.

Kuo has been defined as a “Slugger”, which we expect to see a relatively high SLG and high K%, yet we can easily tell the fell from his career numbers that the significance of his K% is negative towards his performance. The relationship between K-BB% and wRC+ combo had an r^2 of .55. Thus we will focus on the batted balls and seek for the reason that worsened his threats to pitchers. 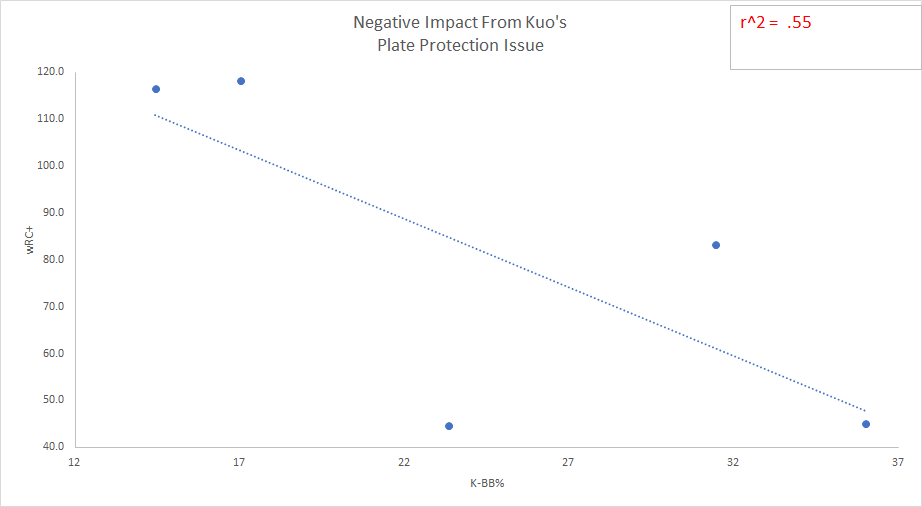 Before we start digging into Kuo’s batted ball profile, several elements we want to address includes:

According to the table, we assumed that Kuo is implementing the “Launch Angle” favour technique. While his GB% dropped more than 5%, he is sending more and more balls to the air. The situation can somehow be interpreted by the significant decline of GO/FO.

In 2018, Kuo was locked in for the entire season, his was ranked second in home runs, only behind ten times all-star Chang Chih-Hao. While it seemed that Kuo could not keep up the performance, the nearly 50% drop in HR/FB told us the story. Nowadays, while hitters try to hit dingers rather than focusing on contact, the bias of high FB% will easily turn to lazy fly balls.

While FB% has been a significant impact for “Sluggers”, Kuo is no doubt included in the conversation. That is Kuo’s 7-batted ball rolling FB%, spanning in 2018 and 2019 seasons. Within 453 batted balls, he is averaging 43% in FB%. While Kuo’s success is not hundred percent depending on his FBs, the XBHs are mostly generated by long balls. There are five peaks that his FB% was over 70%, and turned out that he homered in four of those stretches. 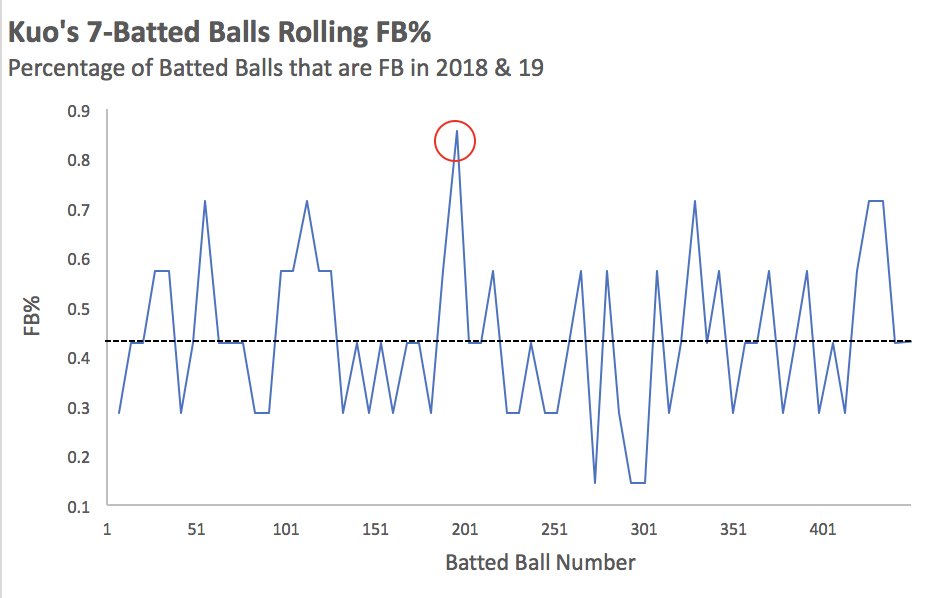 Drop in ISO to Centre, Opposite Field

Kuo homered three games in a row in August 2018, respectively in the red circle of the graph. Although it might seem confusing, the visualized graph is necessary to point out the output difference between 2018 and 2019 FBs. While X-axis represents FB%, Y-axis stands for ISO in FBs. 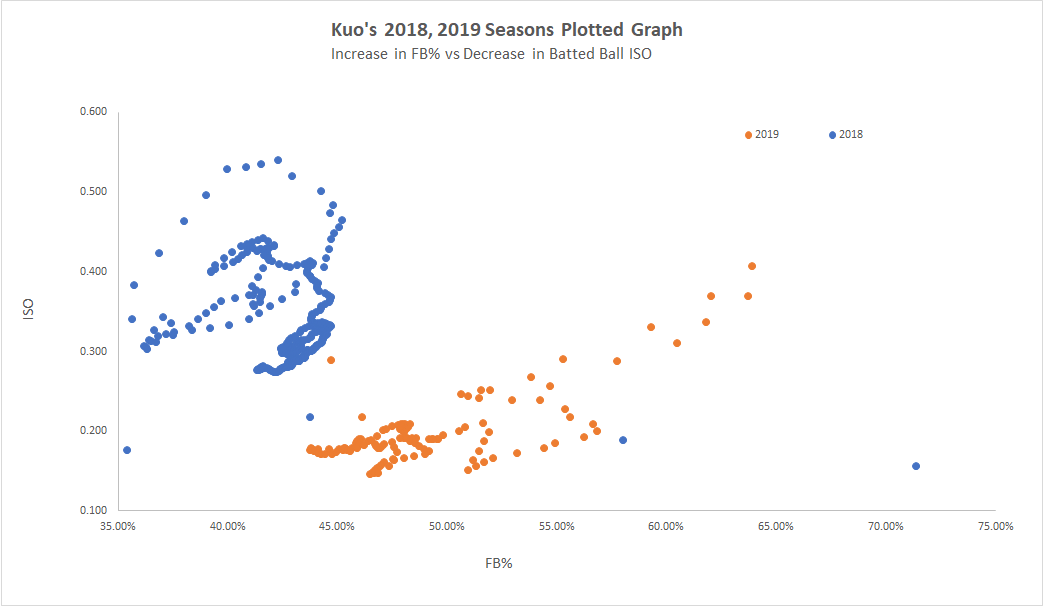 As the clustered datasets on the southeast (orange) differs from the group in the Northwest (blue), Kuo’s production on FBs of 2019 seems very poorly. We assume the elements that affect the batted FBs are exit velocity, defence positioning and contact location. Then we might be able to find out the factors behind Kuo’s ineffective FBs in 2019 and get him out of the slump. For your reference, in a statistical aspect, we wish to assign future data into the blue cluster rather than the orange cluster.

Keep in mind his batted ball directions were similar between two seasons, but the noticeable differences also explained his struggle. Kuo is still pulling the ball well with authority, as he put up .391 ISO in pulled balls with a .175 increase. (Due to his XBHs in 2019 are 90% pulled)

For Uni-Lions fans, they hope that the trend will suddenly reverse while the team is facing so much uncertainty. Last but not least, Kuo was a popular candidate to take over third base for Team Taiwan, which is struggling to find a decent third baseman after veteran Chen Yung-Chi retired from the National Team.

Anyways, statistics can never solve the problem itself, but it will guide players and coaches to the right track.

Mark Lin is from Taiwan, who is currently studying at the City University of Hong Kong. In his spare time, Mark enjoys reading and researching about baseball analytics.