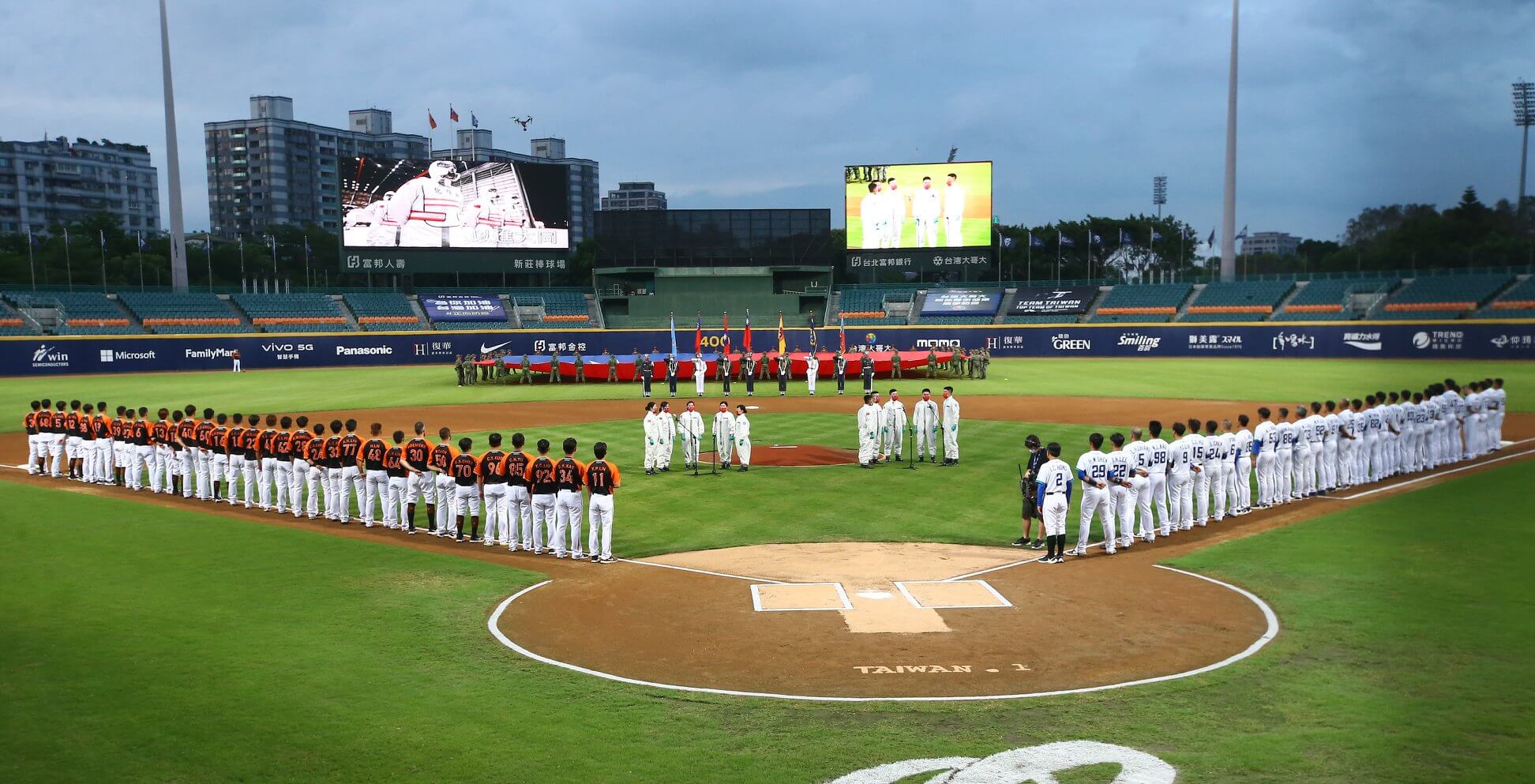 Xinzhuang, New Taipei City — There were no celebratory hugs or high fives on this night, no posing for pictures with mascots, and no scarfing down ballpark hot dogs. There wasn’t even beer. Many facets of a typical ballpark experience went absent on this night in Xinzhuang baseball stadium.

Taiwan’s Chinese Professional Baseball League became the first professional sports league to open its doors to fans since the outbreak of the global Covid-19 pandemic. The Fubon Guardians and CTBC Brothers ushered in a reported 5,805 fans across six games over the weekend.

The Fubon Guardians held on late to defeat the Uni-President Lions 7-6, while the CTBC Brothers simultaneously welcomed back fans by taking down the Rakuten Monkeys 6-4 in Taichung. The games were the first two professional regular-season contests in the world, with fans in attendance in the COVID-19 era.

Fans over the weekend went through a thorough process of temperature checks, providing travel history and social distancing. It was worth it for many to finally see live baseball.

“The first batch to come are the core fans, the die-hard fans, they’ve been fans for a long time,” said Fubon Guardians President Joyce Chen. “So, they are willing to tolerate some form of inconvenience.”

“It’s my life,” Fubon Guardians super-fan Wen-Hsuan Lin said, the first person inside a professional baseball stadium in the 2020 season.

Lin, a native of Keelung and resident of Xinzhuang, said she attended 103 Guardians games last year. She didn’t have a choice but to miss the first 16 Fubon games of the season in 2020.

While confident fans would be able to return to CPBL parks at some point in 2020, she didn’t anticipate it happening so soon. Her co-workers told her the news as soon as they heard.

“My colleagues are very kind to me. When they read the news saying fans can come back, they will tell me straight away,” Lin said. “They kept me updated. All of my colleagues know I love this team.”

Meet Lin, Wen-hsuan, the first baseball fan in the world in 2020. She went to over 100 Fubon Guardians games last year and was first in line tonight at the stadium. pic.twitter.com/v7CeycrqNi

Lin and her other 999 comrades were in fine form following their cheer captains Travis and Anu with the thunder sticks, coordinated dances, and sing-songs for players. It was noticeably louder than when teams pumped in noise through speakers.

Families also showed up. Parents and their little ones spread out among nearly a dozen seats for groups of four to adhere to social distancing.

“Baseball is our life,” Chi-Ten Chen said, who brought his wife, daughter, and son to cheer on the Lions. “In our summer, baseball is an important family activity for us.”

Chi-Ten Chen has been a Lions fan since the team’s inception in 1989. He’s passed that love to his children. His and daughter were noticeably louder than dad and focused on flag-waving to support their Lions.

“It’s great for us. That means we are so outstanding to fight the virus,” Chi-Ten Chen said. “I believe if other countries could do the same actions like Taiwan, everyone’s life can come back.”

Here’s how it all happened.

Lin entered the stadium one hour before the first pitch. The last fans coming in a little over two hours later. The stadium was nearly full a few innings into the game.

Fans entered one at a time. First, they had their body temperature checked by a heat scanner. Secondly, they’d go up the stairs and have to sit down to fill out a form declaring whether or not they’ve travelled abroad the last 14 days and if they’ve come in contact with anybody who has. Fans were also able to fill out the form ahead of time on a phone app. Lastly, fans sanitized their hands with alcohol and found their assigned seating. Fans found their seats with stickers donning them.

Seating arrangement in Xinzhuang tonight: Seats for fans are clearly marked to avoid confusion. All fans have two empty seats between them and an empty row in front and behind them. pic.twitter.com/uIGRj217ZI

Fans who cannot pass multiple temperature checks will be turned away from the ballpark. Face masks are also required for everybody in attendance, media included.

Guardians staff regularly roved the ballpark making sure face coverings were snugly over the nose and that nobody was drifting too closely to their neighbours.

The Guardians and Brothers welcomed fans back only three days after team officials met at the league office. All four CPBL clubs initially submitted proposals to Taiwan’s Central Epidemic Command Center for up to 250 fans. The CECC Commander, Dr. Shih-Chung Chen, gave the league the thumbs up for 1,000 fans instead.

“We were always prepared for reopening at some point in time at different capacities,” Joyce Chen said. “When they opened for 1,000, we started to work with the ticketing system to assign the tickets. That’s the biggest challenge.”

Fans have to submit a new public health form before every single game. Fans put in their Identification card information and registering where their seats are. The CECC requests this information for contract tracing should a positive Covid-19 case occur.

Process for entering the stadium: It’s gone slowly and still happening. One at a time. They stand in a zone to get their temperature checked. Then they have to sit and fill out this form. Then they get their hands sprayed with alcohol and can enter. pic.twitter.com/yGlFxfOFpN

Dr. Shih-Chung Chen gave a speech to the crowd before the game welcoming them back. He mentioned to league and team officials the next realistic step would be 2,000 fans.

Joyce Chen believes teams could eventually allow families with young children and couples to snug in next to each other. The next steps will come when the Center for Disease Control and the CECC feel comfortable with the enforcement of current policies.

“Prior to that, we have to do all the best we can to convince the CDC that we can serve dinner boxes and drinks at the ballpark,” Joyce Chen said. 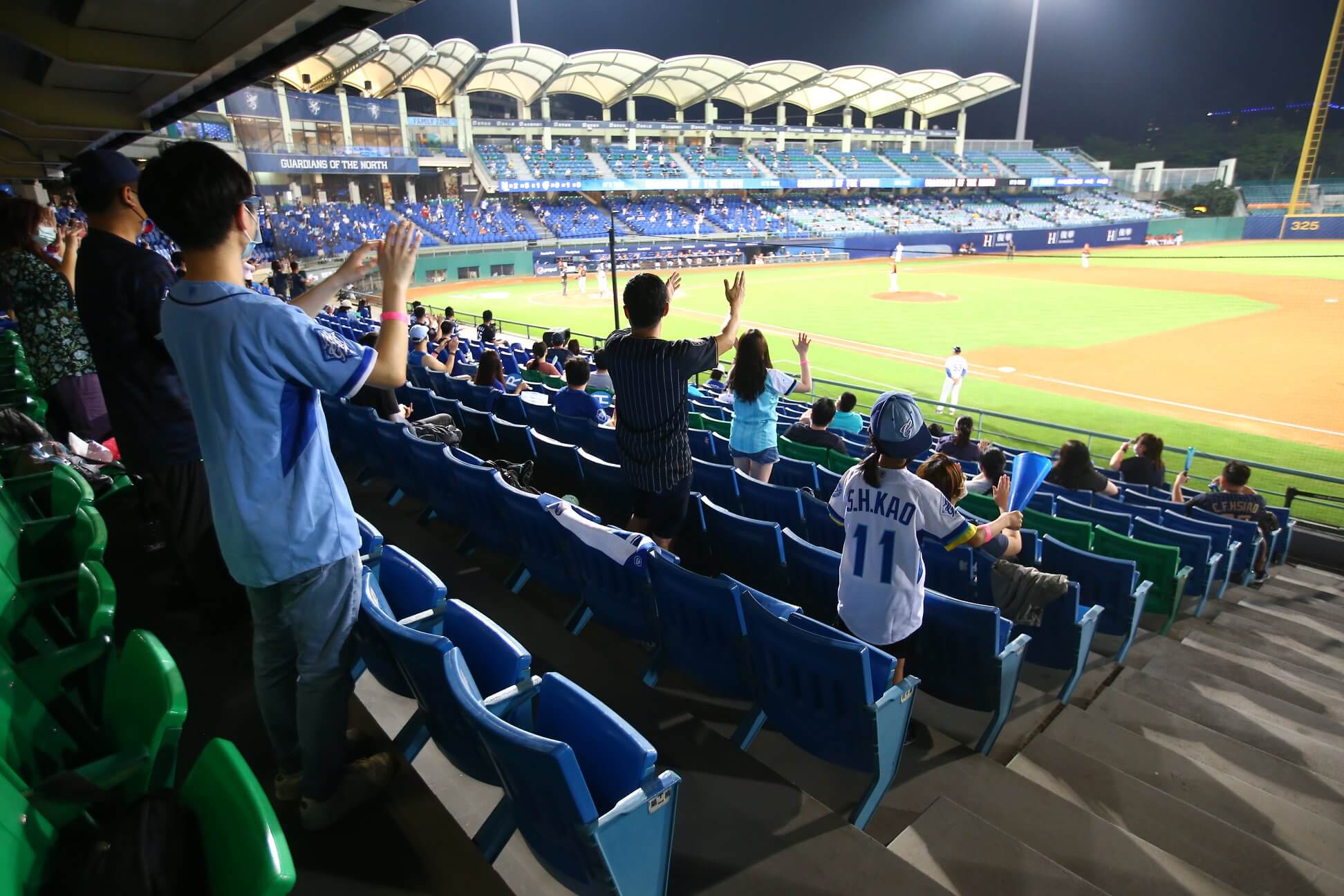 Frankie and Bonnie, the Guardians’ lovable mascots, waltzed past fans without stopping for interactions. Fans wanting pictures had to go the stealth and quick route. Mascot high fives have become a think of the past. While highly visible during the game, touching the Guardian duo has become off-limits. Pictures with the Fubon Angels cheerleaders are also off the table for fans at the moment.

Player-fan interaction is restricted, impacting certain traditions that the players love. Fans usually line up near the team buses prior to games to hand out snacks and tea to players and the Fubon Angel cheerleaders. That’s no longer allowed.

“You have people come up and ask you to sign and ask you to take pictures and to tell them no and try to explain why you can’t do it, it’s frustrating,” Guardians pitcher Bryan Woodall said, praising the fans for their commitment to the club. “But it’s part of it. For us as a country and for the world, to get over the pandemic, these are the sacrifices we have to make.”

Players certainly prefer games with fans. Pumping music in through the speakers doesn’t provide the same adrenaline boost as a chorus of chants from across the stadium, Woodall said.

“They bring a lot of energy,” Woodall said.” They are a big part of what we do.” 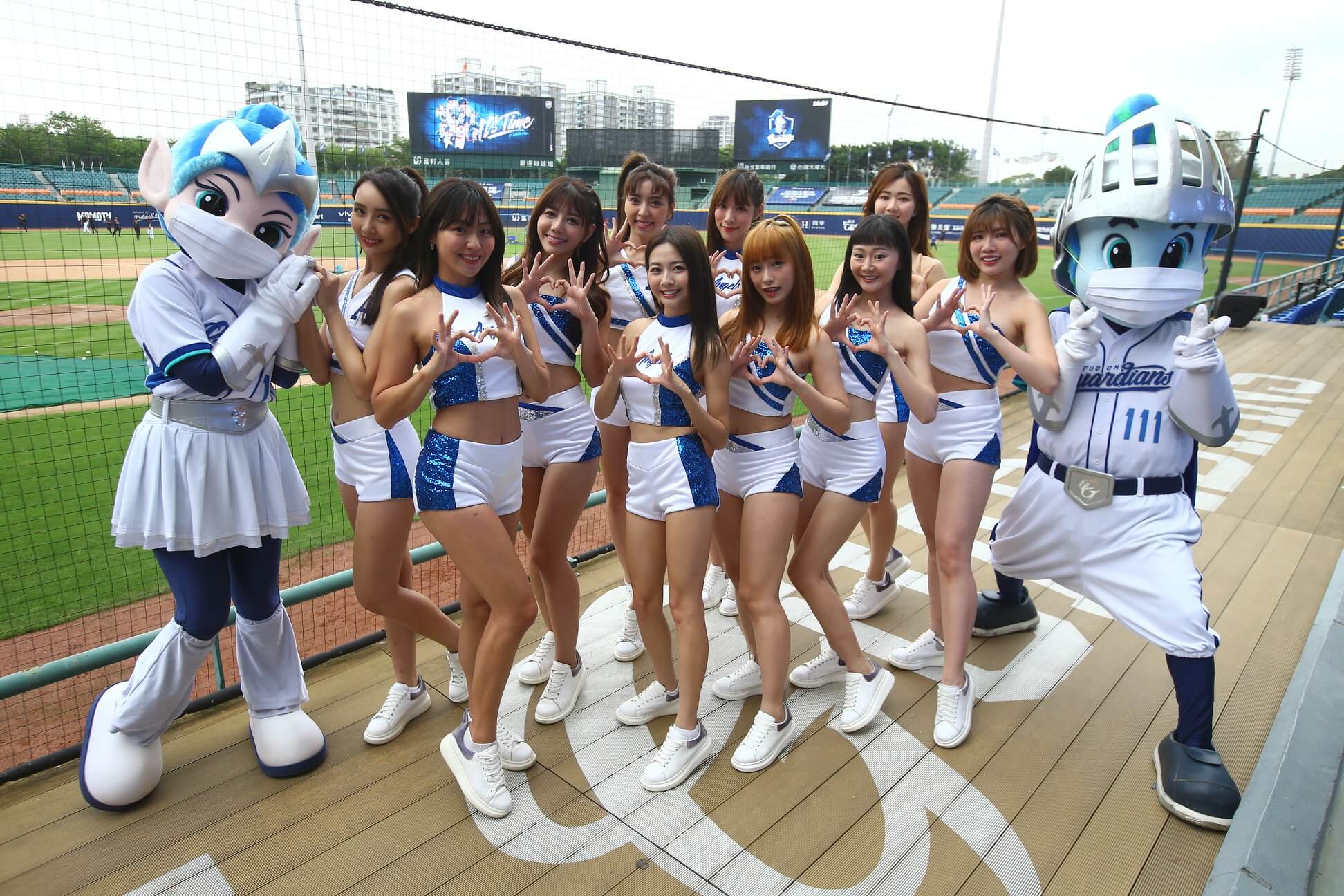 Sean Kramer is a contributor to the official CPBL website and has done work in the past for The Spokesman-Review in the United States. Sean is currently living in Taipei and supports the Fubon Guardians.