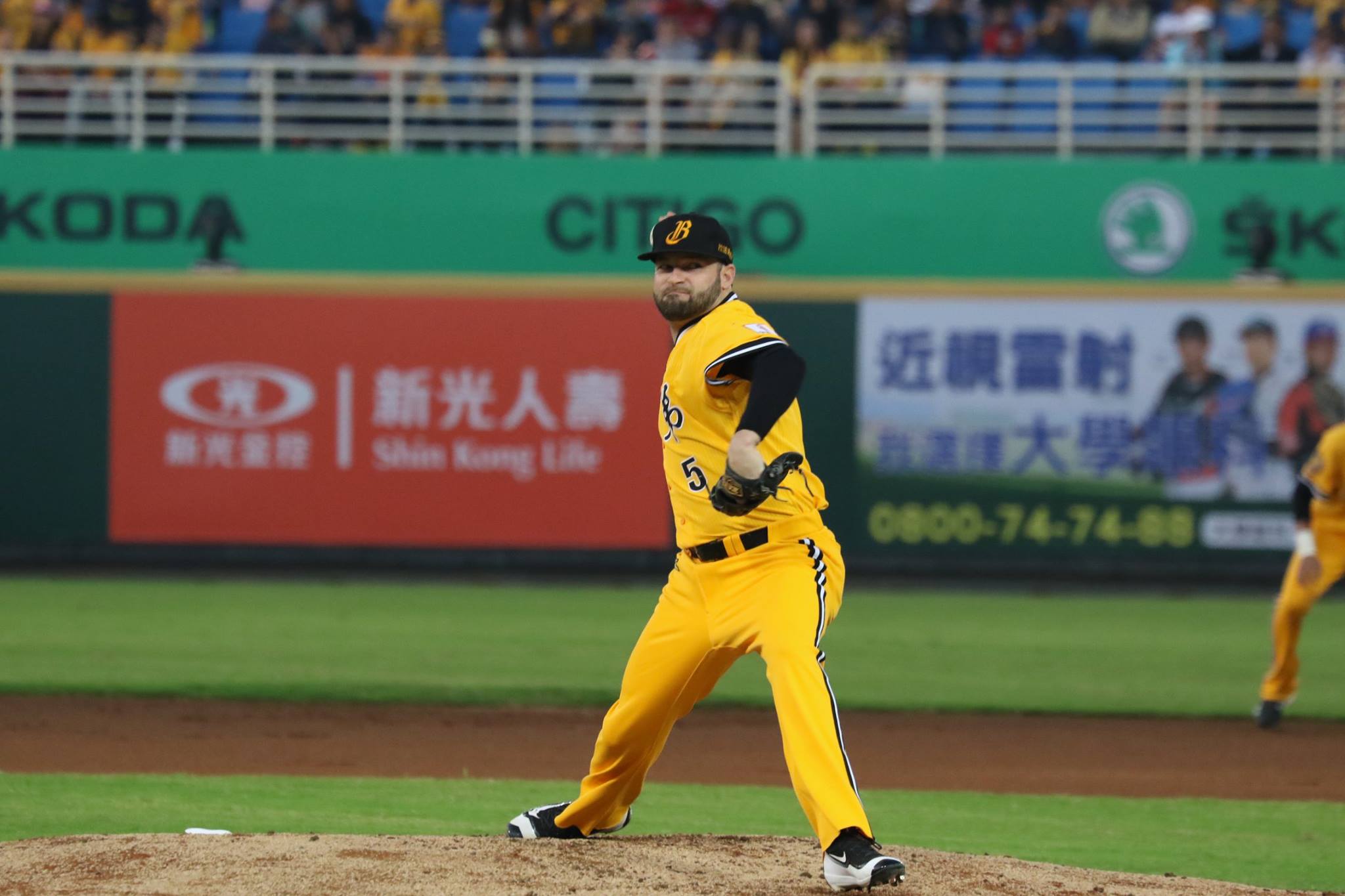 The Chinatrust Brothers’ ace Bryan Woodall is doing what he does best, going out there and throw strikes. With Woodall pitched seven strong innings against the Lamigo Monkeys, the Brothers have won game one of the 2017 Taiwan Series and tied the series 1-1. (The Monkeys have an one win advantage)

“These kids we have, they are playing great baseball right now. Pretty much what we (management) have been telling them is to enjoy what they’re doing, keep working hard and good things will happen. And the team is certainly heading towards that,” said Brothers’ manager Cory Snyder in the post-game interview.

In front of over 19,000 baseball fans, the young Brothers team did everything correctly last night from pitching to hitting.

Starting pitcher Bryan Woodall delivered seven outstanding innings, only gave up two earned runs in 108 pitches, while Brothers lineup completely destroyed Monkeys pitching staff with a total of 13 hits. With that solid performance, the Chinatrust Brothers have won game 1 of the Taiwan Series 8-5.

The Lamigo Monkeys started the game strong with a leadoff double from 藍寅倫 (Lan Yin-Lun), followed by a fielder’s choice and a deep sacrifice fly from 林泓育 (Lin Hung-Yu), Monkeys takes the 1-0 lead in the bottom of first.

Brothers fought back immediately in the top of the second, first with an error by Monkeys third baseman and a walk from starting pitcher Zeke Spruill. Runners on the scoring positions, with a swing of the bat, the Brothers’ hard hitting 21-year-old 陳子豪 (Chen Tzu-Hao) puts the Brothers ahead 2-1 with a double down the line.

Despite running into some turbulence, the Monkeys starting pitcher Zeke Spruill was able to minimise the damage to only four runs (two earned) in six innings of work while striking out five Brothers’ hitters.

With Spruill pulled after six innings and the Monkeys’ bullpen unable to find the strike zone due to the two weeks of break. The Brothers’ lineup began to tear open the Monkeys’ bullpen. First with a hit from 陳江和 (Chen Chiang-Ho), followed by a walk and an infield hit from 吳東融 (Wu Tung-Jung). Brothers now found themselves in a favourable situation of bases loaded with no out.

Despite his fastball hitting 149kph (93mph), the Monkeys’ reliever 王躍霖 (Wang Yueh-Lin) struggled with his commands and was unable to stop the bleeding, as the Brothers’ 周思齊 (Chou Szu-Chi) drew a walk while the bases loaded, and 張志豪 (Chang Chih-Hao) scored another runner with a sacrifice fly. The Brothers are now leading 6-2 after the sixth inning.

The Brothers continue to hammer Monkeys bullpen as they scored another two runs in the eighth and ninth with a string of hits which further extended their lead to 8-2.

Late Comeback Attempt, but Too Late

With a six runs cushion in the bottom of the ninth, the Brothers sent out their hard-throwing sidearm closer 王鴻程 (Wang Hung-Cheng) to finish the job.

Wang found himself in a bases-loading jam after a hit-by-pitch, an error and a single. The Monkeys then took the opportunity with a bases-clearing double from 藍寅倫 (Lan Yin-Lun).  Which reduced the gap to 8-5.

Fortunately, after a mound visit, Wang settled down and secured the victory for the Brothers in Game One of the 2017 Taiwan Series.

It is magic and baseball! Apart from cheering for your teams with the standard chants, fans are going all out with their supporting gears. Including religious amulets and an actual Taoist priest praying for the team.