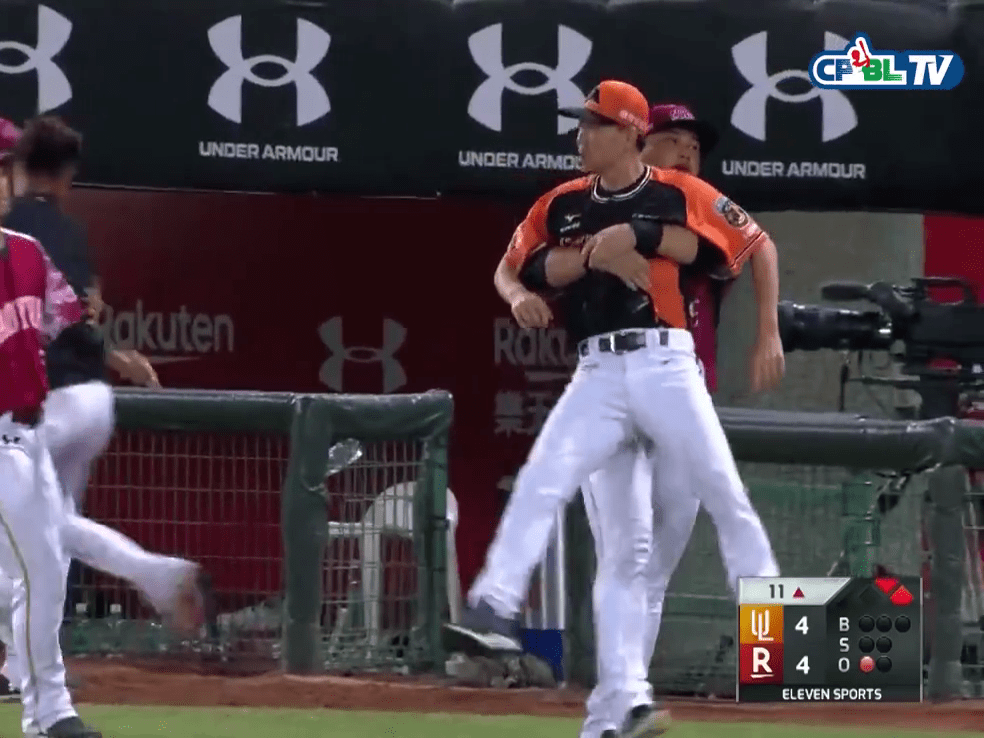 With another year of baseball done and dusted, as always, it is time to hand out the 2020 CPBL STATS Awards! We will take a trip down the memory lane and see some of the best and overlooked moments from the 2020 CPBL season and anything related to Taiwan baseball.

*Notes: Just a word of warning, there are a lot of videos in this blog post. I did my best cutting from over 200 videos down to 70.

Brain Fart Of the Year

When you're playing MVP Baseball 2005 and your dog bumped into your controller. #CPBL pic.twitter.com/45dNWIQE5q

Chef of the Year

Sir, your food is on fire… #CPBL 🔥 pic.twitter.com/zZm3d2NYKD

Best Chiropractor in the Dugout Award

Too Fat to Pick Up Your Glove Award

After a strikeout, the Rakuten Monkeys' 陳俊秀 (Chen Chun-Hsiu) snapped his bat in half over his knee in frustration. 💪 #CPBL pic.twitter.com/XH7Juo9QsG

Culture University's 曾宸佐 (Tseng Chen-Tso) takes his anger out by snapping his bat in half. 😲 pic.twitter.com/151wRC9L6s

Taunt of the Year

Rakuten Monkeys' agent of chaos 陳禹勳 (Chen Yu-Hsun) taunting the Brothers' fans on his way back to the dugout! #CPBL 😂 pic.twitter.com/A9i0zwEjK2

[2020 Taiwan Series G3] INJECT THIS INTO MY VEIN! The CTBC Brothers 許基宏 (Hsu Chi-Hung) extended the Brothers' lead with a 3-run blast and unleashed a savage bat flip! 😮 #CPBL pic.twitter.com/rNOy3Abnyn

Hi Chiang Chih-Hsien, throwing your bat into the stands is not how you do fan service. #CPBL ☃️ pic.twitter.com/wol98gjUH6

Bat Flip At Your GM Award

Additional note: This was during Chang Chih-Hao’s salary arbitration period. Sending a flying bat to your general manager? Nothing suss there!!

[#CPBL Spring Training] Chinatrust Brothers' 張志豪 (Chang Chih-Hao) loses the grip on his bat and it goes flying towards the photographer and the Brothers' general manager. pic.twitter.com/iZBoRwleov

[Taiwan High School Baseball] When you're warming up on the mound with your fly wide open. 😂 #TWHSBaseball pic.twitter.com/VVtRnAZ62o

Uni-Lions' manager Lin Yueh-Ping thought the Uni-Girls were taking a photo of him, but in reality, the cheerleaders were taking a selfie. 😅 #CPBL (📷 via 侯子旅攝 Voyage avec Yves) pic.twitter.com/uoPsrJVl1b

WHAT A GOOD ADULT KID! Grandson caught the home run ball and gave it to his grandma. #CPBL 👍 pic.twitter.com/OZuM2LpMSR

Notes: At Taoyuan stadium, when your home run hit the display car in the outfield, you'll win a car. Need to double check the rule on hitting the cameraman. pic.twitter.com/VZ0OmE2UT4

申皓瑋 (Shen Hao-Wei) put the Guardians on board with a 2-run shot and destroyed a Brothers fan's face. #CPBL

Play of the Year / B.D.E Award

And the best actor award goes to.. 林哲瑄 (Lin Che-Hsuan)!!

The Fubon Guardians' veteran centre fielder made a spectacular home run-robbing catch at the wall and decided to troll everyone at the stadium. 😂 #CPBL pic.twitter.com/laRW6iq06h

THE WINDMILL IS BACK! #CTBros' Mitch Lively is showing all his tricks to mess with hitters' timing. #CPBL

Mascot of the Year: Sababoy

Sean the Elephant gave a can of beer to kid. #CPBL pic.twitter.com/ajADvOwGDl

Best Way to Say Thanks to Healthcare Workers Award

Things got a little heated when the CTBC Brothers' Esmil Rogers and the umpire trying to wish Happy Mother's Day to each other. #CPBL #MothersDay pic.twitter.com/Ojpz8eq80O

When Earth Strikes Back Award

CTBC Brothers' 黃恩賜 (Huang En-Sih) makes a nifty barehanded play on a comebacker and throws to first base for the out. #CPBL pic.twitter.com/UKuG0EwIgR

And just like that, the umpire cam is broken again. #CPBL pic.twitter.com/EkAZmu4nSZ

Hitting Your Own Teammates Award

Led by master troll 陳禹勳 (Chen Yu-Hsun), the Rakuten Monkeys' relievers were having fun playing the statue game in the bullpen. #CPBL 🤣 pic.twitter.com/plbokdN6bq

CTBC Brothers invited kids from Taiwan's Down Syndrome Foundation to throw out the ceremonial 1st pitch! The charity was founded in 1997 with the goals to provide support and vocational training to people with down syndrome. #CPBL 💛

Uni-Lions held a special pre-game ceremony in memory of their team shop staff who passed away in a traffic accident. The team invited Xiao-Hei's father to throw out the first pitch to his daughter's favourite player. 😭 #CPBL pic.twitter.com/OZvWQ1KvsV

The Misfits In the Stands Award

When Darth Vader, Jean-Luc Picard and Winnie the Pooh decided to show up at a CPBL game.

Who are they? Wrong answers only. #CPBL pic.twitter.com/UEW7n8fjHg

Fubon Guardians doing student nights this weekend. Here is a student from another era. #CPBL pic.twitter.com/rIlAdPfC5Y

It's a team effort to bring a sunglasses to 陽耀勳 (Yang Yao-Hsun) in the outfield. #CPBL 🕶️ pic.twitter.com/nGzO9mgKgb

League: There is no problem with the pace of play. #CPBL pic.twitter.com/gtJKXehzaT

The haunting of Taichung stadium. I believe that's a ghost! 👻 #CPBL pic.twitter.com/LQJAHS3lKK

Hello, this is dog. #CPBL pic.twitter.com/L0VotO7gVX

Balk of the Year

CUTE OVERLOAD!! Chu Yu-Hsien's son wanted to do the post-game MVP dance with his dad. #CPBL 🥰

Fun note: Just like most of the kids, Dimple Cannon Jr did not high-five Victor the Space Ape. pic.twitter.com/bLNfIlJLhY

Forgot Which Team You’re On Award