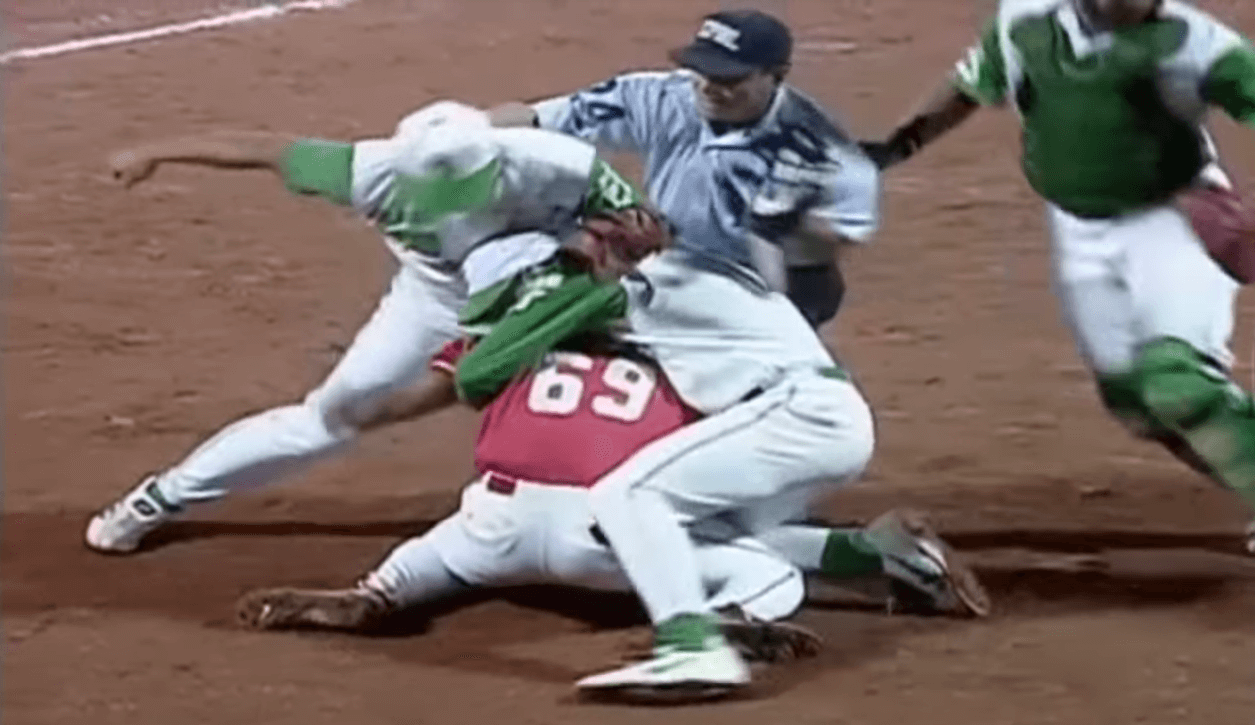 Two Shows in One Night: Baseball and Fights

In this matchup, there was so much bad blood, that two full-scale bench-clearing brawls broke out during the game. Several players were even suspended and fined over this incident.

In fact, this is the only case of a full-scale brawl in 29 years of CPBL history. Bench-clearing brawls hardly ever happen, because Taiwan is a small country and all the players are all friends with each other off the field.

Generally speaking, pushes and shoves are as bad as it gets when the benches clear in the CPBL. But every now and then, the situation will escalate.

Bench Brawl Round One – Fifth Inning

The whole incident started with a home plate collision in the bottom of the fifth inning when Dragons’ Bernardo Tatis ran over the Whales’ catcher 王光浩 (Wang Kuang-Hao) while trying to score on a shallow hit to the centre field.

After the collision, Wang shoved Tatis in anger, and both started exchanges punches. Tatis was immediately taken down by the Whales players and took several hooks to the head while he was on the ground.

Both benches were cleared for the first time of the night as players from both teams rushed to aid their teammates on the field. The instigators Bernardo Tatis, 王光浩 (Wang Kuang-Hao) and 黃自強 (Huang Tzu-Chiang), who joined the fight with a baseball bat, were ejected immediately after the brawl.

*Note: You can see Huang attacked the Whales’ players with a bat around 4:56 mark.

Things did not stop there, however, as both teams were at it once again in the bottom of the ninth inning for round two.

After seeing his Dragons teammates ejected in the fifth inning, the Dragons’ Carlos Sievers went out of his way to intentionally hit the Whales’ catcher 黃鈞瑜 (Huang Chun-Yu) in the face as he crossed the home plate.

For the second time of the night, both benches cleared and a massive brawl broke out to put a rather violent end to wrap up Game One of the 1999 Taiwan Series.

The Aftermath: Suspensions, Fines and Hugfest

The following four players received a ten-game suspension and a $3,500 USD fine. Apart from missing out the entire Taiwan Series, the ten games suspension would carry over to the next season.

The following two players received a three-game suspension and a $1,700 USD fine.

Just before Game Two of the Taiwan Series, the league made both teams gather in the middle of the infield and apologise to the fans for setting a bad example.

According to the UDN editorial piece printed on November 5, 1999, it stressed that the CPBL is already in the dark age due to the game-fixing incidents.

The attendance is at an all-time low (average 1786 per game), with this sort of unsportsmanlike behaviour on the field, how many fans will the league lose over this incident?

The “CPBL Dark Age” started around mid-’90s due to the never-ending game-fixing incidents, the attendance dipped from 6000 per game down to the lowest point of 1676 per game in the year 2000.

Whenever there is a sign of fans coming back, a new game-fixing scandal would come up and pretty much pressed the hard reset button on everything. It stayed like that for almost 20 years, the league attendance never really recovered until the 2013 season.

With the final game-fixing incident in 2009, the league managed to stay clean after that, and fans are starting to come back. The league’s average attendance has since then returned to the original 5000-6000 per game.